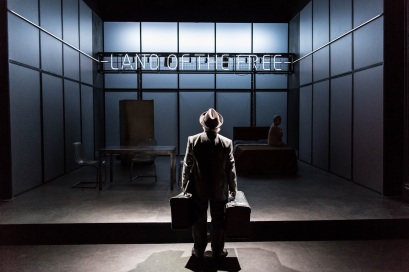 There’s no doubting the power and tragic beauty of this Arthur Miller play: I remember its strength from sixth-form English lessons; even reading around the classroom, it seemed to come alive. On stage and film, I have always found it utterly compelling, a desperately sad – and sadly desperate – illumination of our times.

Okay, so the specifics are late-forties New York, but Willy Loman is an everyman, and his predicament still common to those of us who live in capitalist societies around the world.  We are sold a dream: we are in charge of our own destinies. Work hard, and you will get somewhere. Compete, and you can be the best. Buy these products; owning them will show others what you’re worth. But for Willy, the dream he’s bought in to is crumbling: he isn’t great; he’s ordinary. And he’s lost his edge. He’s a salesman who no longer sells, and corporate America spits him out. Willy is outraged to discover he’s been had, and rails against the boss that now deems him obsolete: “You can’t eat the orange, and throw the peel away – a man is not a piece of fruit.” But his rage is impotent: the odds are stacked against him. Howard does indeed discard him, and Willy is left bereft, forced to confront the reality that his life has been a sham. His house is small and crumbling; his children haven’t changed the world. He can’t even grow beets in his yard, for pity’s sake. And now, when he’s old and tired, he’s left frantic and worried: how can he make ends meet?

This touring production (by Royal & Derngate, Northampton, in association with Cambridge Arts Theatre) has a thoroughly modern feel. It’s not that the period has changed, exactly, it’s just been made less prominent. The minimalist stage, with its fizzing neon illumination – THE LAND OF THE FREE – gives an eerie sense of transience and flimsiness. Costumes are subtly contemporary in style; Howard’s voice-recorder is tiny and looks like today’s technology, but there’s no suggestion it has more than one function. Howard’s reaction to this piece of kit is illustrative too: Thom Tuck (last seen by Bouquets & Brickbats as the excellent Scaramouche Jones) is delightfully brash and insensitive, showing off about how much money he’s spent on this vanity item, even as he refuses to grant Willy a living wage. “Ask your sons,” he tells Willy, blissfully unaware of his own hypocrisy. “Now’s no time for pride.”

Nicholas Woodeson is perfect for the lead role, conveying Willy’s struggle with warmth and vitality. We are frustrated by his refusal to accept a job offer from Charley (Geff Francis), but we understand it too: Howard is wrong; Willy’s pride is all he has left. The anger that spills out of him in response to Linda’s concern is utterly convincing too: he doesn’t want her to worry about him, to prop him up because he’s down. He wants her to be impressed by him, and he’s self-aware enough to know she pities him these days. Tricia Kelly plays Linda with real heart; her anguish, although quieter, is every bit as real as her husband’s, and her epilogue speech is delivered with unbearable dignity. It makes me weep.

I think it’s the direction that makes this production so good: Abigail Graham has done a wonderful job of clarifying everybody’s pain. We know what they’re all feeling, and can’t help but empathise, even when they’re behaving as badly as they can. Indeed, George Taylor’s dysfunctional Biff is the most fully realised I have ever seen. Infidelities, theft, cruelty: none of these are hidden from our view. Because flawed people are people too, and we’re all deserving of respect.

This is a superb production of a truly great play. It’s on at the King’s until 24th June, and the tour continues elsewhere until 15th July. I urge you to try to catch it if you can. 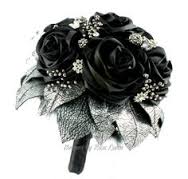 It’s been an amazing August for us at Bouquets & Brickbats. We’ve spent the entire month running from show to show, and have seen some truly brilliant performances. Here’s our pick of the best we’ve seen at this year’s Fringe:

‘Ones to Watch Out For’ Bouquets 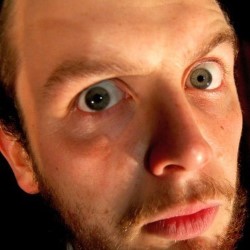 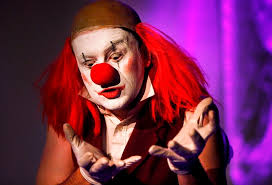 The joy of the Edinburgh Festival has always been the discovery of exciting theatre. We tried Scaramouche Jones simply because we liked the title, but it was far better than our expectations. This is an exercise in consummate storytelling that transcends the unprepossessing nature of the humble room in which it’s staged.

On his 100th birthday, the titular hero shares, for the first time ever, his life story with an audience. In what is essentially an extended monologue, Thom Tuck excels, delivering Justin Butcher’s extraordinarily evocative script to great effect, as he guides us expertly through the seven stages of Jones’s life from his lowly beginnings as the unwanted son of a prostitute in Port of Spain, Trinidad to his final days, treading the boards as a world-weary clown in the city of London.

As Tuck describes the long journey that brought him to the start of a new millennium, exotic locations are effortlessly evoked through Butcher’s florid descriptions – a journey by camel is conjured merely by the rocking motion Tuck maintains as he sits in his chair – while his descriptions of working as a grave digger in a Nazi concentration camp are quite shattering in their intensity. He gives us a range of characters with a wide variety of accents, taking it all in his stride.

I sat there mesmerised from start to finish. A little longer than the usual festival one hour slot, this is really worth seeking out. Rich, eventful and absorbing, I can’t imagine a more satisfying experience for lovers of great storytelling.