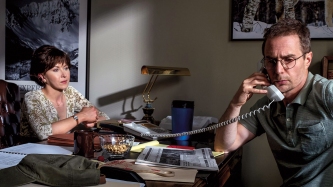 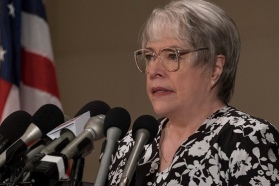 We’re only two weeks into the new year, yet we’re already on our third excoriating movie exposé of a corrupt American justice system. Appalled? Yes. Saddened? Yes. Surprised? Not so much. Not any more.

Richard Jewell is the story of a hapless security guard, the focus of an intense FBI and media investigation. His crime? Discovering a bomb and alerting the authorities. But lazy  stereotyping (‘he’s a bit of an oddball and he lives with his mom’) is enough to convince the forces-that-be that Jewell is the perpetrator, responsible for two deaths and more than a hundred injuries, despite a lack of any evidence whatsoever. And, once that suspicion is leaked to the press, Jewell loses control of his life.

Paul Walter Hauser gives us a convincing portrayal of a decent man driven almost to despair. He portrays Jewell as utterly sincere – a naïve, mild-natured, over-zealous employee, a stickler for the rules. His mother, Bobi (Kathy Bates), has always taught him to respect authority, and Jewell has absolute faith in law and order. He is devastated when it proves to be a phoney, a façade.

Sam Rockwell plays Watson Bryant, the real estate lawyer who comes to Jewell’s rescue (in real life, Bryant employed a team to help him; here – for the sake of a stronger storyline – he goes it alone). It’s a terrific performance, giving us a real sense of the man’s selfishness and impatience as well as his deep-rooted morality. Thank goodness for Bryant; I dread to think what might have happened to Jewell if he hadn’t once worked in the same building and earned the man’s respect. Without representation, who knows?

It’s so depressing. How can a so-called mature democracy have a justice system that is so blatantly unfair, where guilt or innocence is decided by how much money an individual has, or by the colour of their skin, or by how desperate the law enforcers are to meet their targets? And Eastwood’s film delivers this message well.

A shame, then, that the women’s roles are so reductive, and that real-life AJC news reporter Kathy Scruggs (Olivia Wilde) is depicted as having slept her way to success. It’s an evidence-free stereotype as offensive and pervasive as the one the movie exposes.

It’s not the film’s only fault. Billy Ray’s script is somewhat pedestrian – long-winded in places – and the cinematography a little murky but, nevertheless, taken in conjunction with Seberg and Just Mercy, this amounts to a searing condemnation of a broken institution. 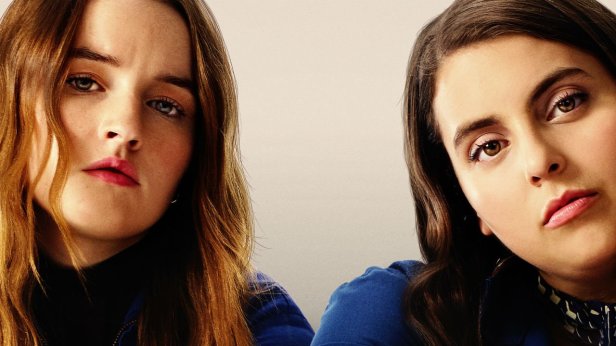 It’s the day before they graduate from high school, and best friends Amy (Kaitlyn Dever) and Molly (Beanie Feldstein) are secure in the knowledge that they have achieved first class grades. They’ve managed this by working hard and staying well away from the kind of distractions that their less dedicated classmates have enjoyed to the full – parties, romances, drink and recreational drugs. Amy and Molly are the kind of students who spend their leisure time in the library and who can’t help correcting the grammar on the graffiti in the school toilets. They are – basically – swots.

So when Molly discovers that all her hard-partying classmates are also going to graduate with honours and will attend the finest universities in the land, she’s understandably dismayed. She vows that, tonight, she and Amy will attend the wildest party in town, that they will pursue the long-held romantic interests they have deliberately set aside, and  indulge in all the hedonistic pleasures they can lay their hands on.

In short, they will, for once in their lives, let their hair down and enjoy themselves. The only problem is, they don’t actually have the address where the party is being held…

Dever and Feldstein are terrific as the central couple and the witty script expertly kindles the laughs as the duo experience alarming setbacks in their quest to experience those forbidden pleasures. There are some genuinely heartwarming moments too, as the girls finally address the unspoken issues that lie at the heart of their mutual dependancy.

The real strength of Booksmart, however, lies in the way it cheerfully sets up a whole string of audience expectations, only to cleverly subvert them – from the school’s sardonic principal (Jason Sudeikis), who moonlights as a taxi driver, to the resident rich kid (Skyler Gisondo), reduced to trying to lure friends to his party by offering them free iPads.  Nothing here is ever quite what you expect and none of the characters are allowed to descend into cliché.

Directed by actor Olivia Wilde, Booksmart is a joyful little peach of a movie: sharp, clever and perceptive. It’s sure to make you laugh and you may even emerge from the cinema (as I did) with a lump in your throat. Enjoy!

There’s a lovely little movie trapped inside Life Itself. An arch, playful, beautifully acted and intriguingly populated film, with a gently emotive storyline. It’s all there: ripe and ready. Unfortunately, it’s covered in an unwelcome layer of fridge-magnet cod-philosophy, with a side helping of pomposity thrown in. Oh dear.

Things start well. We meet Will (Oscar Isaac) as he stumbles drunkenly into a coffee shop, clearly having hit hard times. His therapist (Annette Bening) encourages him to talk about his relationship with his wife, Abby (Olivia Wilde), and their back-story is revealed in a series of flashbacks. The idea of the unreliable narrator is introduced early on, and reinforced by Abby’s student thesis on the subject. Life, concludes Abby, is the ultimate unreliable narrator, more random and unpredictable than anyone cares to acknowledge. Her friends like the idea, but she fails her course, because the essay strays too far from literary criticism.

Still, as the film goes on to show: she’s right. Time and again, writer-director Dan Fogelman pulls the rug from under our feet, throwing us swerve balls and catching us unawares. The action moves, almost arbitrarily,  from Will and Abby’s New York to Javier González (Sergio Peris-Mencheta)’s Spain – where all the dialogue, naturally, is in Spanish – and back again to New York, where we meet Will and Abby’s daughter, Dylan (Olivia Cooke). All this I like. The characters are captivating, and the seemingly unrelated strands are pulled together expertly. Segmenting movies into ‘chapters’ seems to be a bit of a recent phenomenon, and it works well here. Antonio Banderas is wonderfully understated as the emotionally needy Mr Saccione, and Laia Costa, as Javier’s wife, Isabel, really lights up the screen.

So why doesn’t it work? Because that premise, of life being the ultimate unreliable narrator, is overworked. It’s not left to be played out; we’re not trusted to understand without an actual lecture, delivered in the final chapter by Elena (Lorenza Izzo), Dylan’s teenage daughter, who, we discover, has been narrating throughout. There’s not enough substance to the idea to merit this much talk; it’s a simple – dare I say banal? – concept, enough to carry a story but not to bear such scrutiny. It takes itself too seriously, accords itself too much weight. And that’s a real shame.

There’s a filmed Q and A at the end of our screening, but it reinforces rather than alleviates our concerns. The interviewer, Jenny Falconer, talks of weeping copiously as she watched, but we both feel curiously unmoved. It’s clearly a movie that wants to tap into our emotions, but the narration distances us from events, and makes that level of engagement difficult. I don’t mind this – the film is at its best when it’s witty and stylised, which it is, a lot of the time – but it feels muddled, as if the ‘message’ is getting in the way of all the good stuff that’s on offer here.