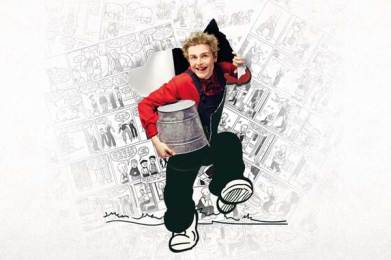 Wullie and I are old acquaintances. He appeared every week in the comics I read as a child back in the 1960s, but he first saw the light of day in 1936 and has endured over the decades, recently clocking up his eightieth anniversary. Last year, his image made millions for charity with the Big Bucket Trail, which featured individually decorated statues of the iconic kid from Auchenshoogle in various locations around Scotland.

This musical, by the same team who brought The Broons to the stage, features  a sprightly and raucous collection of songs in a wide range of styles. The simplicity of the storyline would seem to make it a good fit for a younger audience. Indeed, the kids in the auditorium tonight are clearly enjoying the proceedings (especially when Wullie’s pet mouse, Jeemy, makes an appearance), but the majority of the audience are older people, here to reconnect with something fondly remembered from their childhoods.

Wahid (Eklovey Kashyap) is a teenage boy, born in Scotland to Pakistani parents. He’s having a hard time fitting in, forever being asked if he ‘likes his new home.’ Well-meaning neighbours ask him where he’s really from, while the school bullies enjoy making fun of him at every opportunity. Wahid is Scottish, but somehow, ‘not-Scottish,’ and he’s beginning to struggle with his own identity.

In the school library, he meets up with the mysterious librarian (George Brennan), who gives him an Oor Wullie annual to read, telling him it’s the perfect introduction to ‘being Scottish.’ Wahid is somewhat taken aback when Wullie (Martin Quinn) appears in his bedroom, claiming to be in search of his famous bucket, which has unexpectedly gone missing. Wahid remembers that he saw just such a bucket in the school library, so the two of them set off in search of it.

It isn’t long before Wullie is joined by his gang – Bob (Dan Buckley), Wee Eck (Grant McIntyre), Soapy Soutar (Bailey Newsome) and Primrose (Leah Byrne). They are not surprised to discover that the bucket has been purloined by arch enemy, Basher McKenzie (Leanne Traynor), and the kids enlist their old adversary PC Murdoch (Ann Louise Ross) to help them retrieve it. In the second half, the comic book characters take Wahid into the fictional world of Auchenshoogle, where their clothes transform from black and white into full colour.

Valiant attempts are made to make Wullie more relevant to a modern day audience. There’s a song that features him performing a duet with Alexa, for instance and there’s a nice bit of inclusivity where the cast put on saris and leap about to a bhangra-style tune. PC Murdoch gets an opportunity to strut his stuff to a rock song and there’s some funny interplay between him and an amorous teacher (Irene MacDougall).

If there’s an over-riding problem, however, it’s that the drama fails to generate any genuine sense of peril. Wullie wants his bucket back, but we’re never entirely sure why its so important to him, nor indeed what will happen if he doesn’t get it. The result is never less than knockabout fun, but here’s a musical that doesn’t seem entirely sure about what kind of audience it’s trying to appeal to.

To my mind, it’s surely one for the kids, assuming you can get them away from their phones and tablets for a couple of hours. Wullie has been an enduring character over the decades and there’s no reason why a new generation of youngsters shouldn’t fall for his charms, given half a chance.