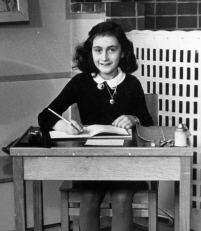 It’s Holocaust Memorial Day and watching this documentary seems a fitting way to mark it. Anne Frank would have been ninety this year, had her life not been stolen by a repugnant ideology, had she not been murdered at sixteen because she was Jewish.

She’s just one, of course: a single, accessible representative of the unimaginable six million WWII victims of genocide. But her remarkable diaries provide a powerful insight, humanising those who were dehumanised, her singular narrative a worthy stand-in for those who cannot speak.

In this documentary by Sabina Fideli and Anna Migotto, other voices are added to the mix. We hear from five survivors (Arianna Szörenyi, Sarah Lichtsztejn-Montard, Helga Weiss and sisters Andra and Tatiana Bucci), and their testimonies are heartbreaking. It’s impossible not to cry whilst listening to these dignified, thoughtful old women, all of whom have managed to build good lives for themselves, despite the horrors they endured: taken from their families, imprisoned, starved, brutalised, experimented on. As Nazi atrocities fade from living memory, it’s imperative that we should bear witness to these remaining first-hand narratives, because we cannot afford to forget. This is what happens when the far right ascend to power; this is why we need to be alert.

If the survivors were this film’s main focus, I think its impact would be immense. Unfortunately, there’s a lot of filler too, additional elements that weaken its effect. There’s a young girl, for example (Martina), travelling around Europe, purportedly learning about Anne Frank. But she never gets to speak or respond emotionally to what she discovers. Instead, we get a lot of artful shots of her looking sad with on fleek eyes, posting vapid photo-messages on social media (‘What were you thinking, Anne?’) with a rash of hashtags attached (#emotional). This seems like a terrible waste: we know from Anne’s own diary how intelligent and erudite young people can be; why is Martina reduced to such banality? I can’t work out what we, the audience, are supposed to gain from her presence.

I’m not sure about Helen Mirren either. She’s reading excerpts from the diary, sitting in a mock-up of Anne’s bedroom in the tiny Annexe where she hid for two long years. She reads beautifully – of course she does; she’s Helen Mirren – but I can’t help feeling this section would be stronger if the reader were someone with a closer connection to Anne Frank and the Holocaust.

Nevertheless, for the survivors’ stories alone, this is a must-see. Because their stories really matter. As one of the marvellous youngsters featured in the opening sequence makes clear: we need to be open to refugees, to people fleeing fear and oppression. Because every time we turn our backs or close our doors, another Anne Frank is condemned to die, and we reveal just how little we have learned.