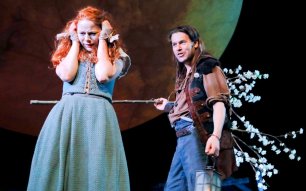 It’s 1727, and Janet Horne (Deirdre Davis) is eking out a living in the Scottish Highlands with her teenage daughter, Helen (Fiona Wood). Times are tough: they have no peat for their fire and very little food. But Janet knows what to do: a few incantations, some good luck charms and a venomous tongue are all she needs. If the neighbours think she’s a witch, then they will try to keep her sweet…

And, by and large, it seems to work. The people of Dornoch might fear Janet, but they like her too, for her healing hands and her lively spirit. Even the local clergyman (Graham Mackey-Bruce) seems content to turn a blind eye her way. But, when Douglas Begg (Alan Steele)’s cattle succumb to sickness, he blames Janet and, in his anger, reports her to the sheriff, David Ross (David Rankine). And the wheels are set in motion for what turns out to be Britain’s last ever legal execution for witchcraft.

This revival of Rona Munro’s 2009 play has been designed by Ken Harrison, with two huge discs dominating the acting space. The first forms a stage, raked at a steep angle, cracked like dry earth; the second is suspended above, a moon, sometimes reflecting the ground below, sometimes projecting other images. It’s stark and atmospheric, ingenious in its simplicity – and the brutal beauty of the final scene is really something to behold, especially the light on Elspeth Begg (Helen Logan)’s face as she shouts her cryptic message of support.

Deirdre Davis is superb in the lead role, a beguiling, unapologetic rebel, forging her own path. Janet Horne is a strong woman: sensual, clever, brave and charismatic – and Davis’s performance brings her forcibly to life. She might cling a little too closely to her daughter, afraid to let her go, but she loves her fiercely nonetheless; she only wants to keep her safe. Because the world – as Janet knows – is cruel, and Helen’s claw-like hands and feet will be seen by some as the devil’s mark. Their spiky relationship is delightfully depicted, Fiona Wood subtly teasing out Helen’s frustration and naivety. Little wonder she’s such easy prey for the enigmatic Nick (Alan Mirren).

Richard Baron’s direction is faultless: this is a fluid, unsettling piece, carefully choreographed and visually arresting. But the real magic lies in the writing, Munro’s lyrical script an absolute delight.

It’s a shame that this is such a short tour. There’s only one more chance to see this production; if you’re free, head to the Traverse tonight. Otherwise, you really have missed out.