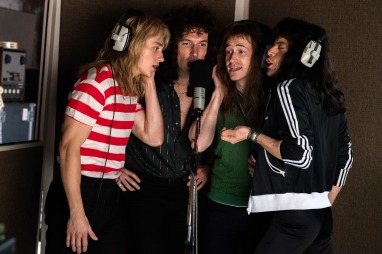 There seems to be a bit of a Greatest Showman buzz about this film. Most critics have been decidedly sniffy about it, accusing it of glossing over some of Freddie Mercury’s darker traits, as well as his bisexuality. Audiences, on the other hand, have eagerly embraced it, claiming it as a five star picture. The truth, of course, lies somewhere in between these extremes.

It’s a competent biopic, with a mesmerising central performance from Rami Malek that goes way beyond mere impersonation. He fully inhabits the character of Freddie Mercury and it’s interesting to conjecture how the film might have fared if it had stuck with its original lead, Sacha Baron Cohen. It’s hard to believe anyone could have done it more justice. Still, for all that, there are missteps in the mix and, just like The Greatest Showman, this so-called ‘true story’ takes some sizeable liberties.

We first meet Freddie in 1970, when he’s still Farrokh Bulsara, working as a baggage handler at Heathrow Airport and, in his spare time, virtually stalking local band, Smile, which features Brian May (Gwilym Lee) on lead guitar and Roger Taylor (Ben Hardy) on drums. When the band’s singer departs to join another outfit, the way is open for Freddie to offer his services as vocalist and songwriter. After a slightly shaky start, and the addition of bass player, John Deacon (Ray Mazello), the band soon have a record deal and are on the way to a brilliant career. Freddie, of course, woos and marries the ‘love of his life,’ Mary Austin (Lucy Boynton), something that proves rather awkward when he latterly arrives at the conclusion that he’s bisexual.

To give the screenwriters their due, they don’t exactly ignore Mercury’s darker side, particularly during the period where he leaves the band to embark on an ill-fated solo career (although, in reality, that break up never actually happened). He is shown to be a loose canon, indulging in the excessive lifestyle that ultimately led to his untimely death. Even here there are untruths. The film wants us to believe that Freddie had his HIV diagnosis before he appeared at Live Aid. He didn’t. Also, the gig, which took place in 1985, is depicted here as some kind of a reunion for the band, but actually they’d been recording their album The Works only the year before and had just toured it all over the world.

Of course, changing the truth for dramatic effect is not exactly a new phenomenon, but what about those missteps I mentioned? Well, for one thing, the other members of Queen seem incapable of speaking any of their lines without throwing in some exposition, just in case we’re unsure of what’s happening at any given time. For another, the clunky scenes where Freddie interacts with his Zoroastrian parents, Bomi and Ger, are decidedly mawkish. There’s also a cameo by Mike Myers as (fictional) EMI record executive ‘Ray Foster’, who denounces the titular single as ‘too long for the radio’ in a cod Northern accent that borders on caricature. This leads to the band walking out on their record label. (Again, this didn’t happen.) In the end, it’s these liberties that niggle me more than anything else. When you’ve got a story as amazing as this one, why muddy the waters by adding stuff that never actually occurred?

Of course, you can forgive a lot when you have the kind of soundtrack that’s offered here, featuring pretty much all of Queen’s biggest hits – and the decision to end the film with an uncanny twenty minute recreation of the band’s appearance at Live Aid is a clever mood, sending audiences out on a high. Rami Malek’s performance is the kind of flashy role that can attract Oscar attention, and I won’t be remotely surprised if he gets a nomination next year – but to my mind,  Bohemian Rhapsody represents a bit of a missed opportunity.

In the end, it’s a decent biopic, but not an entirely convincing one.