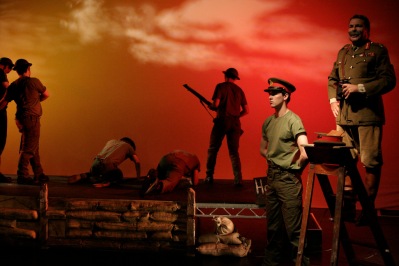 It’s very nearly the 100th anniversary of the November armistice, the event that officially marked the end of the First World War – so what better way to commemorate the occasion than with Joan Littlewood’s celebrated show? I have fond memories of it myself. Back in the days when I had more hair and fewer inhibitions, as a member of the Redbridge Youth Theatre, I was myself a performer in a production of it.

It’s a curious affair, Oh! What a Lovely War, a precarious balancing act between comedy and tragedy, sentimentality and shock. Get it wrong and it can be an unrewarding watch.

Happily, tonight, Captivate Theatre have got it just right, sticking closely to the original format and launching into the song and dance routines with absolute conviction. By the first interval, they have managed to achieve a powerful sense of momentum – but, as the audience leaves for the break, a fire alarm goes off and we find ourselves herded out onto the wintry street, waiting for a fire engine that never turns up. By the time the situation is resolved, and we’re allowed to head back inside, I am seriously worried that the company will never be able to recover their former brio. The fact that they quickly do pays testament to their grit and determination.

I’m soon reimmersed in the atmosphere, tapping my foot to those oh-so-jolly songs, each one designed to mask the fears and insecurities of a nation in dire peril. Meanwhile, on the screen behind the actors, the awful statistics of the conflict unfold – the war to end all wars left ten million young men dead and countless millions more injured or missing. This was the war where the average life expectancy of a machine gunner at The Front was four minutes.

This is, of course,  an ensemble show, so it’s impossible to pick out names from the cast; but the scene where a Sergeant Major barks a series of unintelligible orders at his latest recruits has me crying with laughter, while the one where a young nurse leads the company in a heartfelt version of Keep the Home Fires Burning, has me shedding tears of an entirely different kind. Powerful stuff, this and in its own way, informative. Chances are, you’ll leave knowing a lot more about the First World War than you did when you came in. We’d like to think, of course, that the powers-that-be would never be stupid enough to make the same mistakes again, but a mere glance at recent world events makes me suspect that they just might.

At any rate, this is a lovely version of a classic production that marked a milestone in British Theatre. Go and see it, before it marches on.