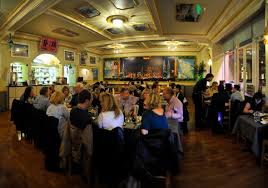 Looking for somewhere with an incredible sense of style? Maybe Kampung Ali isn’t for you. The decor is, at best, functional and the huge mural on the back wall, which depicts an eastern city at night, complete with twinkling neon lights is, dare I say it? A bit kitsch. Maybe you’re looking for somewhere with an extensive wine list? Again, you won’t find it here. The house white is a chardonnay and at a push, they’ll drag out a glass of rosé sauvignon blanc that tastes as though it was originally opened to celebrate the marriage of Charles and Diana – though beer lovers will fare rather better with a bottle of Tiger. But if you’re looking for superb Malaysian cuisine offered at great value prices, well then, that’s a different matter entirely.

We began with two classic starters. The Vegetarian Spring Rolls were light, flakey and delicately spiced, one of the best versions of this dish I’ve ever tried. The the Satay Chicken Skewers came immersed in a thick and tangy peanut sauce, that was finger-lickingly good. Both portions were on the generous side (those with faint appetites may want to share a starter.)  The main courses were equally stunning. I had Crispy Pork with Noodles, which had a clean, pleasing flavour spiced with lemongrass and chilli, just enough to make the taste buds tingle, but not too overpowering. Susan opted for King Prawn with Noodles, a big hearty bowl of fishy goodness, swimming in a broth that was fierce but satisfyingly sweetened with coconut milk. No diner at Kampung Ali can afford to miss out on a bowl of their Coconut Rice  which is light, sticky and fragrant.

A meal for two with drinks came in at £36, which in the City Centre, can only be viewed as exceptional value. So, come to Kampung Ali. Ignore the decor. Sit down and take your taste buds for a brisk trot around the park. You won’t be disappointed.