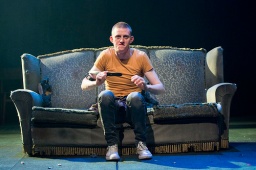 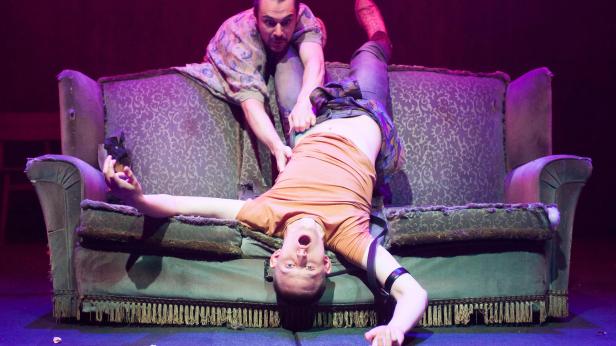 Tackling such a classic brings inevitable problems. The first half of this Citizens Theatre production has an air of over-familiarity about it, perhaps amplified by the fact that the characters and sets are styled very much like the movie. At times, it feels almost like we’re watching Danny Boyle’s Greatest Hits. All the best-known scenes from the film are present and correct – the hopeless work interview, the dead baby, the suppositories in the toilet (this scene evens receives a round of applause, which is weird, when you think about it – what are we actually applauding?).

None of this is the fault of the cast who deliver uniformly excellent performances – Lorn MacDonald is a superb Renton, Martin McCormick a brilliantly foul-mouthed Begbie… it’s just that I found myself longing for a few surprises.

Lucky for me then, that the second half actually supplies them, hewing much closer to Welsh’s original vision, managing to offer some scenes I’ve never seen before and some interesting variations on the ones I know by heart. Angus Miller takes on the dual roles of Sick Boy and the doomed, Tommy, while Gavin John Wright actually seems to be channeling Ewan Bremner as the hapless Spud. But perhaps its Chloe-Ann Taylor who has the most difficult job here, switching effortlessly from Alison, to Dianne and even, during the infamous ‘going cold turkey’ scenes, Renton’s Ma.

It’s not usually done to give a special mention to the set design (take a bow Max Jones) but the final scenes play out in an ingeniously designed London hotel room, which somehow glides slowly onstage like a kind of hallucination, creating a ‘wow’ moment all by itself.

Overall, this is an assured production; and when I think about it, maybe those familiar scenes just need to be there – otherwise it’s like going to see your favourite band in concert and them neglecting to play any of their best-known songs. A game of two halves then, Boyle versus Welsh. Whichever half you prefer, this is well worth your time and money.