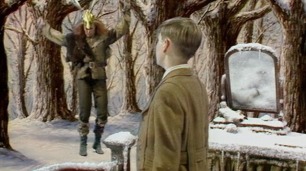 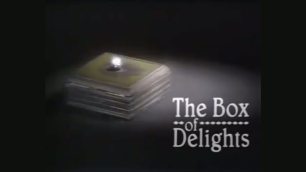 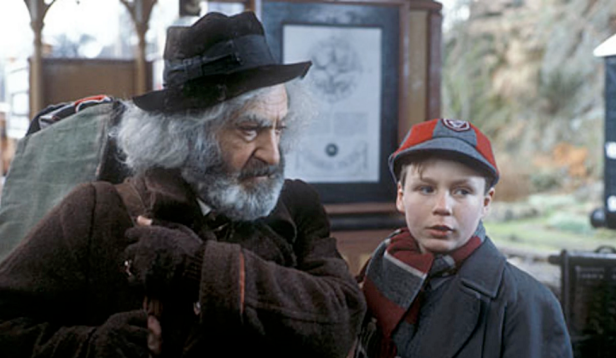 The Box of Delights might have started life as a novel by John Masefield in 1935 but, for me, it will always belong to 1984 and television.

The BBC children’s adaptation was my first ‘box-set binge,’ enjoyed even before I knew those words existed in formation. It was Christmas Eve, early afternoon. I was thirteen, my brother three years younger. Mum called us down to the front room, where there were blankets on the sofa and a plate of mince pies on the coffee table. And she handed us a present. A small, VHS-sized box, containing – we soon discovered – the whole six-part series, painstakingly recorded every week, and saved up for this festive treat (a cunning plan, of course, designed to keep us out of the way while our parents did the busy stuff that parents do on Christmas Eve, but we were blissfully ignorant of this then). We settled in for the long haul, and were mesmerised by the tale that unfolded.

I never revisited the story: never read the book, never sought to see it again. But when I saw it advertised as part of The Cameo’s 2017 Christmas season, I couldn’t resist the chance to view it, on a somewhat larger screen than the 14″ one we had back then.

And it’s lovely; no wonder the memory is so golden. Okay, some of the special effects – so impressive in their day – look pretty shonky now, and there are gaping plot-holes that need to be plugged. But the overall effect is still magical; the story still engaging.

Orphan Kay Harker (Devin Stanfield) is home from boarding school for the holidays. He’s staying with his guardian, Caroline Louisa (Carol Frazer) in his ancestral home, Seekings. He’s pleased to find that his friends, the Jones, will be staying for the holidays, as their parents have had to go abroad (there are four Jones kids, but only two of them really have anything to do, namely Maria (Joanna Dukes) –  a fierce little thing who’s a dab hand with a pistol – and Peter (Crispin Mair), who’s a bit of a drip really, but proves to be a useful ally in Kay’s adventuring. Susan and Jemima (Flora Page and Heidi Burton respectively) remain in the background, Peter’s ‘sensible sisters’ – I’m not sure why they’re there). Maria’s fears that the festive season might prove dull are certainly unfounded: Kay, it seems, has been identified as someone who can help those in the magic world, and Cole Hawlings (Patrick Troughton) has a mission for the boy. For Hawlings has a magic box, and the evil Abner Brown (Robert Stephens) is in hot pursuit of it; Kay must look after the Box of Delights until it can be returned to its rightful owner…

The ‘returning it to its rightful owner’ is by far the worst part of the series. It’s episode five; we’re reaching the dramatic climax. And then there’s a bizarre scene where Kay goes ‘to the past’ to seek Arnold of Todi (Philip Locke), by way of some badly rendered pyramids and some English-speaking ancient Egyptians. It’s the weakest moment by far, but it doesn’t prevent me from enjoying the show. Nor does the odd acceptance everyone seems to have of kids going missing (a whole gaggle of choirboys are kidnapped, and there’re no parents waiting for them when they’re finally rescued).

Because, despite the flaws, there’s a lot to love. Jonathan Stephens is really funny as inept gangster, Chubby Joe, and Robert Stephens is as delightfully malevolent as you’d expect, clearly relishing the role of arch-villain Abner Brown. The scenes with Herne the Hunter  (Glyn Baker) are spectacular, and some of the effects are truly impressive, even after all these years (the shrunken posse of kids standing next to Chubby Joe’s big foot is particularly well-conceived). It’s a joyous, festive slice of nostalgia. Seriously, what’s not to love?