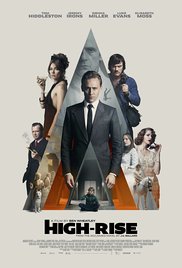 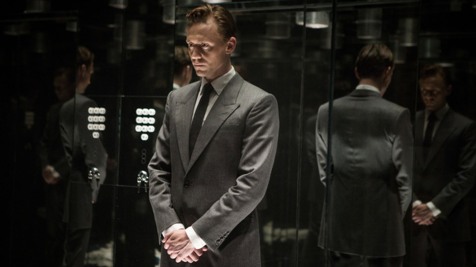 In a relatively short career, British director Ben Wheatley has produced an interesting selection of films, all quite different but all in their own way, intriguing. High-Rise, an adaptation of the novel by J.G. Ballard, represents the flowering of that talent. Here is a film so packed with interesting ideas, it sometimes threatens to explode in all directions, as Wheatley throws idea after idea into the mix and hits the ‘mix’ button. While the end result is far from perfect, it’s never less than riveting. I’ve read that David Cronenberg planned to film this back in the day and it’s easy to see the attraction – some of the scenes here put me in mind of his debut feature, Shiver; but having said that, this is Wheatley’s vision and for the most part it works beautifully.

Doctor Robert Laing (Tom Hiddleston) moves into a massive high rise apartment and attempts to make friends with the neighbours. They include the promiscuous Charlotte Melville (Sienna Miller), a belligerent TV documentary maker, Richard Wilder (Luke Evans) and his pregnant wife, Helen (Elizabeth Moss). It’s clear from the very start that Laing doesn’t quite fit in, but he clearly intends to give it his best shot. He is soon summoned up to the penthouse to meet the building’s architect, Anthony Royal (Jeremy Irons) who has created a lavish rooftop garden for his wife, Ann (Keeley Hawes) complete with flocks of sheep and a white horse for her to ride. At first, it all goes relatively smoothly, but when the tenants on the lower floors start to encounter electricity blackouts and food shortages, it’s not long before rebellion begins to spread irresistibly upwards, resulting in outbreaks of pillaging, looting and the weirdest Abba cover version you’ve ever heard.  The toffs in the top floors decide it’s time to take matters into their own hands and set about commandeering everything they can get their hands on. Laing (a typically amoral Ballard antihero), watches it all with a detached air but eventually finds himself drawn into the chaos as he tries to survive as best he can.

Ballard’s story is an obvious allegory about class and privilege and the ways in which society has to adapt to changing circumstances in order to continue. Wheatley, working as ever with his writer companion, Amy Jump, has cleverly opted to set the story in the 70s, just like the source novel, creating wonderful sets of brutalist architecture, together with some quite horrific fashion statements. The first forty minutes of this zips along with complete confidence and looks absolutely ravishing; the last third is perhaps a little less sure of itself, but having said that, there are more great ideas on offer here than you’ll see in most Hollywood movies and once again, the pace rarely falters.

The conclusion (which features the voice of Margaret Thatcher) will have you discussing the film’s message long after the final credits have rolled. Please don’t miss this one, it really is rather fabulous.