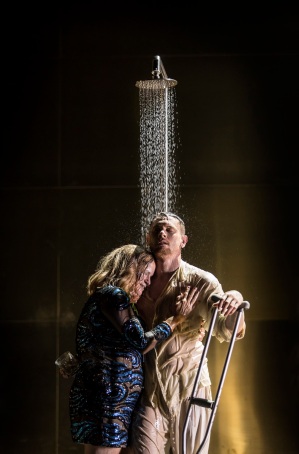 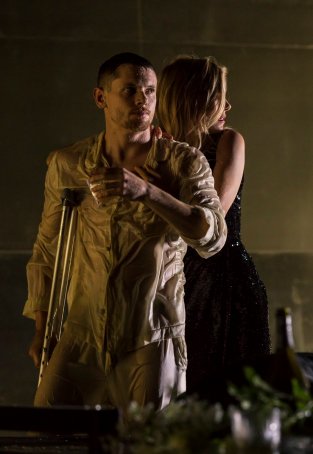 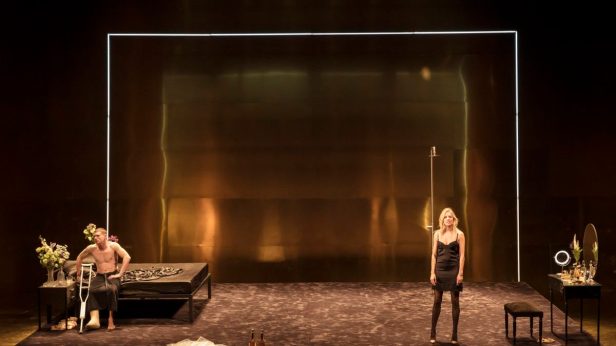 Once again, NT Live offers us the chance to see a noteworthy production we’d otherwise be consigned to reading about. For David Lan, who has stepped down from his role as the Young Vic’s artistic director, Cat on a Hot Tin Roof is a triumphant swan song, elegantly directed by Benedict Andrews, and beautifully performed.

The audacious casting certainly pays off. Sienna Miller’s Maggie is a standout, all bravado and desperation: strong but vulnerable; gorgeous but unloved. She really is like the titular cat, prowling the room, unsure how to function in a world where everything has changed. Brick refuses to acknowledge her, whatever she says, whatever she does. She talks incessantly, needling and provoking, removing her clothes, painting her face. Nothing works. She’s lost him. It’s a bravura performance, a faultless incarnation of a classic role.

Jack O’Connell also gives an impressive turn as Brick, the handsome football-star-turned-alcoholic, traumatised by his best friend, Skipper’s suicide, unable to accept his own homosexuality. Brick is a complex character, at once the most honest and the most duplicitous in the play. He refuses to indulge the ‘happy family’ façade, makes no secret of his drinking, doesn’t care who hears him rejecting his wife. But he lies to himself about his feelings for Skipper, even when Big Daddy offers him absolution; his own prejudices too ingrained to allow him to face the truth. O’Connell imbues Brick with dignity, despite his obvious descent; it’s a clever, nuanced portrayal of a truly tortured soul.

Colm Meany is suitably awful as the tyrannical Big Daddy, a Trump-like figure whose only redeeming feature is his willingness to accept his favourite son’s sexuality. But it’s Lisa Palfrey as Big Momma who really intrigues me: she plays the matriarch as an infantalised neurotic, who has to be protected from realities she can’t stand. Big Daddy openly despises her, calls her fat and stupid; she responds in a high-pitched, lilting, little-girl voice, her ‘He doesn’t mean it’ lines imbued with the rhythm of a fingers-in-the-ear-la-la-la denial. It’s a very different interpretation of the character from any I’ve seen before, but it absolutely works.

There’s not much to criticise here, although I do think more could be done to create the sense of sweltering heat and claustrophobia inside the house. It’s all there in the dialogue, but I never really feel it. The modern setting means there are none of the traditional plantation shutters and whirring fans, and that’s okay – I like the set – but I think I’d like the ice to melt, to know that the water in the shower is cold, to understand why Maggie is wearing tights when it’s so hot. Still, these are mere quibbles.

If you haven’t seen this yet, there’s sure to be an encore screening soon. I urge you to catch it. 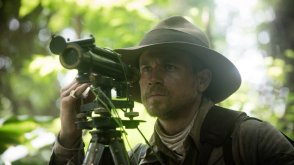 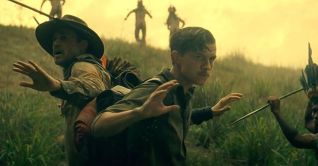 Colonel Percy Fawcett was the quintessential ‘Boy’s Own’ hero. When he went missing deep in the Amazon jungle in 1924, along with his elder son Jack, he became a cause celebre. Many rescue attempts were mounted, resulting in the deaths of over a hundred men and there has been untold speculation ever since about what might have happened to them. James Gray’s film is an attempt to give us a fuller picture of Fawcett and his extraordinary life. It’s an unapologetically old fashioned movie, one that takes its own sweet time to tell its complex story.

When we first meet Fawcett (Charlie Hunnam) in 1912, he’s an ambitious army officer, stationed in Northern Ireland. His attempts to further his career are constantly dogged by the bad reputation left by his dissolute father, but he is ably supported by his incredibly pragmatic wife, Nina (Sienna Miller). When Fawcett is approached by the Royal Geographical Society to helm an expedition into uncharted Bolivia, he sees an opportunity to advance his fortunes and readily accepts, even though it means he will have to leave Nina and his first child, Jack for what could be years. On route to Bolivia, Fawcett meets the man who will be his assistant, the taciturn Henry Costin (Robert Pattinson) and together they set off into the heart of the jungle. It is just the start of a whole series of explorations into the Mato Grosso and as time goes on, Fawcett becomes increasingly obsessed with the idea of a lost ancient civilisation, the titular Z – but all attempts to find it seem doomed to failure and his speculations about it are greeted with general ridicule by everyone back in England, who cannot bring themselves to believe that such ‘primitive savages’ could ever have been so sophisticated.

The film lovingly recreates the era of intrepid exploration and Hunnam is an appealing Fawcett, but the slow, at times almost hallucinogenic nature of the proceedings certainly won’t be to everybody’s taste. Furthermore, though the film sticks closely to the facts for the most part, it cannot help but slip into the realms of speculation in the final furlong. The truth is we do not know (and almost certainly never will know) what actually happened to Fawcett and his son – indeed it is this very nebulous quality that has contributed to the legend.

Nevertheless, though far from perfect, this is an intriguing and sometimes enthralling production that deserves your attention.

In a relatively short career, British director Ben Wheatley has produced an interesting selection of films, all quite different but all in their own way, intriguing. High-Rise, an adaptation of the novel by J.G. Ballard, represents the flowering of that talent. Here is a film so packed with interesting ideas, it sometimes threatens to explode in all directions, as Wheatley throws idea after idea into the mix and hits the ‘mix’ button. While the end result is far from perfect, it’s never less than riveting. I’ve read that David Cronenberg planned to film this back in the day and it’s easy to see the attraction – some of the scenes here put me in mind of his debut feature, Shiver; but having said that, this is Wheatley’s vision and for the most part it works beautifully.

Doctor Robert Laing (Tom Hiddleston) moves into a massive high rise apartment and attempts to make friends with the neighbours. They include the promiscuous Charlotte Melville (Sienna Miller), a belligerent TV documentary maker, Richard Wilder (Luke Evans) and his pregnant wife, Helen (Elizabeth Moss). It’s clear from the very start that Laing doesn’t quite fit in, but he clearly intends to give it his best shot. He is soon summoned up to the penthouse to meet the building’s architect, Anthony Royal (Jeremy Irons) who has created a lavish rooftop garden for his wife, Ann (Keeley Hawes) complete with flocks of sheep and a white horse for her to ride. At first, it all goes relatively smoothly, but when the tenants on the lower floors start to encounter electricity blackouts and food shortages, it’s not long before rebellion begins to spread irresistibly upwards, resulting in outbreaks of pillaging, looting and the weirdest Abba cover version you’ve ever heard.  The toffs in the top floors decide it’s time to take matters into their own hands and set about commandeering everything they can get their hands on. Laing (a typically amoral Ballard antihero), watches it all with a detached air but eventually finds himself drawn into the chaos as he tries to survive as best he can.

Ballard’s story is an obvious allegory about class and privilege and the ways in which society has to adapt to changing circumstances in order to continue. Wheatley, working as ever with his writer companion, Amy Jump, has cleverly opted to set the story in the 70s, just like the source novel, creating wonderful sets of brutalist architecture, together with some quite horrific fashion statements. The first forty minutes of this zips along with complete confidence and looks absolutely ravishing; the last third is perhaps a little less sure of itself, but having said that, there are more great ideas on offer here than you’ll see in most Hollywood movies and once again, the pace rarely falters.

The conclusion (which features the voice of Margaret Thatcher) will have you discussing the film’s message long after the final credits have rolled. Please don’t miss this one, it really is rather fabulous.

The unprecedented success of this film at the American box office, displays the depth of feeling that the US audience (especially those who vote Republican) have for Clint Eastwood’s biopic of Chris Kyle, proclaimed on the poster as the ‘most lethal sniper in history.’ Interestingly, it’s not something that Kyle himself ever wanted to boast about and as the film makes clear, it’s a legacy that took a terrible toll on the man himself and, indirectly, even led to his own death. There are many liberal-minded people who have been quick off the blocks to denounce this as dumb, Republican rhetoric, a recruitment film for would-be psychopaths, racists and the NRA, but I honestly feel that those who denounce it are failing (perhaps deliberately) to see it for what it is – a grunts-eye view of the war in Iraq from the perspective of somebody who had the unenviable task of actually being there.

The film begins with a young Chris being taken hunting by his daddy and making his first ‘kill,’ a deer. (So far, so redneck.) We then gallop on some years to find an older Chris (a beefed-up Bradley Cooper) witnessing the attack on the World Trade Centre and promptly enlisting in the Navy Seals. The man is a unabashed patriot who doesn’t hesitate to do what he perceives as ‘his duty to his country.’ He undergoes a brutal training regime and his gift for target shooting some comes to the fore. And all to soon, he’s in Iraq, on the first of four punishing tours, working as a sniper, only to discover that his first target is a little boy carrying a lethal weapon…

Now, if there is a criticism to be made of the film, it’s this. We only ever see the ‘enemy’ from the point of view of the American soldiers and, to a man, woman or child, they are all duplicitous, evil villains, every one of them intent of killing the infidels at any cost.  Common sense tells us that that simply can’t be the case and it would have been nice here to have witnessed some Iraqi characters portrayed in a more sympathetic way, but that clearly wasn’t Eastwood’s objective here and he ignores it.

But don’t go thinking either that this is a film that glorifies or whitewashes the war in Iraq. It’s a savage, visceral recreation that horrifies as much as it thrills and Eastwood makes it clear how such a career exacts a punishing price on those who live it, something that is clearly demonstrated by Kyle’s fraught relationship with his wife, Taya (Sienna Miller), whenever he comes home on leave. Cooper plays Kyle as a big, genial giant, a quiet man who constantly hides his inner turmoil from the world and who only eventually finds release by working with veterans who have themselves been damaged by the war. Whatever your political take on this (and there’s no doubt that Eastwood pitches his tent squarely in the Republican camp) the film surely doesn’t deserve the approbation that’s been heaped upon it. It’s well directed, its battle scenes are unflinching in their graphic detail and at no point does anybody stand up and make a speech about how America has done the right thing.

War is always a tragedy and American Sniper never pretends that it’s anything else.