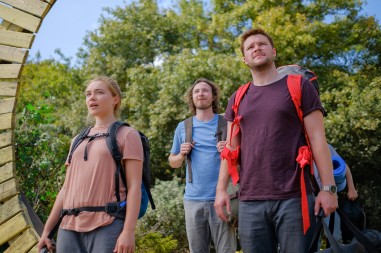 Rising star Ari Aster’s second movie, Midsommar, is a bucolic horror, a direct descendant of The Wicker Man. Starring Florence Pugh as the troubled Dani, it upends as many horror tropes as it embraces, the excesses building gleefully to a riotous, high-pitched finale.

The film opens with Dani worrying about her sister and pestering her reluctant boyfriend, Christian (Jack Reynor), for reassurance. He’s out with his flatmates: Josh (William Jackson Harper), Mark (Will Poulter) and Pelle (Vilhelm Blomgren), frustrated at being disturbed. He wants out of the relationship, he tells his friends, but he’s dithering, loathe to make a decision and act on it.

But then Dani’s parents die suddenly and he can’t ditch her; how can he? She’s clingy and needy, can’t be left alone. Christian feels trapped, compelled to invite her along on the trip he and his pals have planned, to visit the remote commune in Sweden where Pelle grew up, and take part in their midsummer festivities.

The tension here is nicely drawn: Christian caught in the middle between his girlfriend and his friends. Mark does not want Dani there and she is too fragile to let his animosity wash over her. The setup is promising.

From the dingy, gloomy hues of the opening reel, we are suddenly transported to the gloriously colourful and sunlit idyll of Pelle’s home with the Härga people. This is a daytime horror, no murky shadows where monsters lurk: these fiends are hiding in plain sight. Because, of course, not all is as it seems…

This is not a perfect film. There are some clear issues. Christian in particular is underwritten; his behaviour is inconsistent and lacking credible motivation. What we do know (he’s too weak to walk away from a failing relationship; he will deny a friendship, Judas-like) makes him unsympathetic, so it’s hard to care what happens to him. And then there’s Will Poulter. Mark starts off well enough, adding an interesting dynamic to the friendship group. But, once they arrive in Sweden, he seems to slowly fade from the film, a woeful underuse of such a fine actor. Perhaps, though, it’s the unthinking adherence to problematic clichés that causes me the most concern: exoticising the only disabled character; positioning naked elderly women as grotesques; suggesting mental illness is synonymous with violence and murderous intent.

Despite these problems, Midsommar is largely successful, not least for its bravura. Pugh is as compelling as ever, a real physical presence, dominating the screen. And there are some assured flourishes – a sequence where the protagonists’ car seems to quite literally start running upside-down along an inverted highway clearly shows Aster’s directorial chops. The mounting sense of dread is expertly manipulated, with even the silliest scenes adding a genuine disquiet. The fact that it all takes place in this sun-dappled pastoral hideaway only serves to highlight the brutality.

It’s worth noting too that all the horror here is human: we don’t need the supernatural; we are quite evil enough.