Left to right: John Lithgow as Jud and Jeté Laurence as Ellie in PET SEMATARY, from Paramount Pictures. 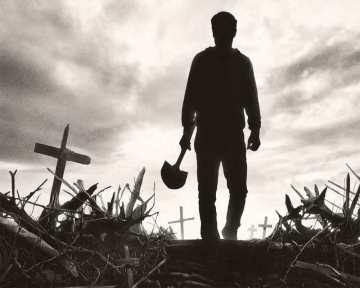 Since the success of It, Stephen King seems to be enjoying a bit of a cinematic renaissance – and, as most of his books have already been made into films, studios are gleefully remaking the ones that weren’t so successful first time around.

Pet Sematary initially saw the light of a cinema screen in 1989, under the direction of Mary Lambert, and boasted a screenplay by Mr King himself. I know I saw it when it came out but I remember very little about it – other than the fact that I was rather underwhelmed by what I saw. This new version, directed by Kevin Kolsch and Dennis Widmyer, certainly offers a more confident approach to the source material, even if there are some inherent problems lurking  in the mix. Essentially a spin on WW Jacob’s famous short story, The Monkey’s Paw, Pet Sematary still harbours some of the tropes that might have passed muster when the project was first conceived, but which look a little dodgy in the current climate.

Here, Louis (Jason Clarke) is the overworked doctor who decides to move his wife, Rachel (Amy Seimetz), and his two children, Ellie (Jete Laurence) and Gage (Hugo Lavoie), from the big city to the peace and quiet of the countryside. Major mistake. The family’s new home comes complete with a massive stretch of land, most of which is heavily forested and much of which is the former ancestral burial grounds of the Mic Mac Indians. The land also encompasses the badly spelled graveyard, where the local kids go to bury their dead critturs (though I feel impelled to ask, where are these local kids? We see them only once, wearing creepy looking masks and then never again).

Young Ellie soon makes friends with elderly next-door neighbour, Jud (John Lithgow, twinkling effortlessly), and even introduces him to her beloved pet cat, Church. But the highway beside the house is a regular route for articulated lorries driven by reckless idiots and, when Church winds up splattered across the tarmac, Jud convinces Louis to hide the truth from Ellie and to bury the feline’s remains up on the old Mic Mac land, assuring him that, if he does so, something incredible will happen.

Sure enough, the next day, Church comes wandering home but, as the family soon discovers, something about his nature has changed for the worse…

For the most part, the film holds up well, creating an atmosphere of steadily mounting terror, even if some of the developments do test my credulity. (The family owns a vast stretch of land, so naturally they decide to host Ellie’s birthday party right beside that dangerous highway instead of somewhere safer – like, that would happen, right?) But there are some genuinely nerve wracking scenes here and also some explicitly visceral ones that push the 15 certificate to its very limits.

What really don’t work are the sections that flash back to Rachel’s childhood, when she had a morbid terror of her sister, Zelda – because she had a twisted spine. Sorry, but physical deformity is not fair game for horror and somebody should have thought carefully about those scenes before merrily throwing them into the screenplay – especially when said sister behaves like something out of The Exorcist.

Still, that error aside, this is genuinely compelling in places and offers one of the bleakest endings I can remember seeing since… well, another Stephen King-inspired movie, The Mist. Go to this if you feel like being terrorised but, be warned, some of those body horror scenes have been woefully misjudged.