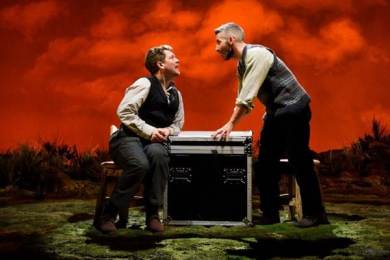 A little rural town in County Kerry has been appropriated as the setting for a big Hollywood movie, and most of the locals have landed themselves roles as extras. They include Jake Quinn (Owen Sharpe) and Charlie Conlon (Kevin Trainor), two likely lads with plenty of time on their hands.

Charlie is, at first, perfectly content to take his forty pounds a day and all he can eat from the catering wagon, but Jake has somewhat loftier ambitions. He has written a screenplay of his own and intends to show it to everybody he meets in the vague hope of achieving some kind of success. When the film’s glamorous star, Caroline, unexpectedly flutters her eyelashes in Charlie’s direction, Jake inevitably hears the sound of opportunity knocking. But he has a lot to learn about the ways in which the film industry operates…

Stones in his Pockets by Marie Jones is a gentle and engaging comedy. First performed in Belfast in 1996, it went on to have a lengthy run in the West End and, later, on Broadway. This timely revival is beautifully performed by Sharpe and Trainor, who – as well as delivering the lead roles – also portray a whole host of incidental characters: there’s the film’s bombastic director; some of its stars (including the seductive Caroline); a muscle-bound security guard; various local inhabitants (one of whom is the only surviving extra from The Quiet Man); and even the doomed, drug addicted teenager, Sean Harkin, whose unexpected suicide gives the play its title and whose funeral arrangements threaten to throw the Hollywood production into disarray.

But this is really all about the performance. It’s a delight to watch the two actors snap so effortlessly into each successive role, using a whole array of poses and gestures to ensure we’re never in any doubt as to who is talking to who at any given moment. The resulting interplay provides plenty of laughs and, at key points, some moments of genuine poignancy.

This play examines how the film industry remodels reality to make it more palatable for the big screen, how it exploits bystanders, seducing and dazzling them them into providing whatever is necessary to achieve a satisfactory end product. And it also highlights the desires and dreams of ordinary people that are so rarely given the opportunity to bloom into some kind of reality.

Stones in his Pockets is a little gem that’s well worth your attention.