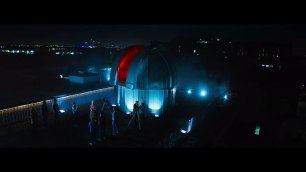 Out of Blue is a bit of a conundrum, a real curate’s egg of a film. At times, its audacity is breathtakingly impressive; at others, its pretentious incoherence is, well, kind of annoying.

Patricia Clarkson is Detective Mike Hoolihan, a genre-typical detective with an alcohol problem and a troubled past. When astrophysicist Jennifer Rockwell (Mamie Gummer) is found dead next to her telescope, Mike notices similarities to a series of unsolved murders by the so-called .38 calibre killer. As she investigates, long-repressed childhood memories begin to resurface, and her composure fractures, leaving her vulnerable and exposed.

So far, so good, but of course Carol Morley was never going to embrace a straightforward whodunit crime procedural. Instead, we are treated to a philosophical musing on the nature of our place in the universe, looking outwards into the infinite vastness of a black hole, and inwards to the personal experiences that shape who we become. Stylistically, this works: the cinematography is sumptuous, and the blue-red colour palette is bold and arresting. But the endless banging on about Schrödinger’s cat gets a bit wearisome; this is entry level stuff given unwarranted gravitas. And the suggestion of parallel universes seems an unnecessary complication, adding little and muddying the plot.

I like the plot, actually, with its twisty ending (although presumably that’s down to Martin Amis, on whose novel this is based), and Patricia Clarkson’s performance is admirable here. Toby Jones is a welcome addition to any movie, and his depiction of Rockwell’s snivelling boss, Professor Ian Strammi, is no exception to this rule. Jacki Weaver never disappoints either, and she’s on top form as Rockwell’s flaky mother. But even these fine actors are not quite enough to save this film from its own sense of how clever it is. It’s all a bit show-offy for my taste.