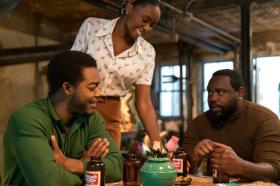 After the meteoric success of 2016’s Moonlight (only his second attempt at direction), Barry Jenkins could probably have chosen any subject he fancied for his third feature. As it turned out, he’d already begun developing If Beale Street Could Talk at the same time as his Osar winner, adapting it himself from a groundbreaking novel by James Baldwin, so of course it was a logical step to move straight on to that. Set in the early 1970s, it’s a stylish slow burner that centres on the doomed relationship of two young people.

Tish Rivers (Kiki Layne) has known Alonzo ‘Fonny’ Hunt (Stephan James) since the two of them were kids. She’s the youngest daughter of a loving and supportive family and is still based at home, while he’s become more of a loner, living in a rundown basement where he’s trying to establish himself as a sculptor. (His work, it must be said, is spectacularly underwhelming). When romance finally blooms between Tish and Fonny, it seems almost inevitable that they will end up as man and wife – but when he is wrongfully accused of rape and sent to prison, she discovers that she is pregnant with Fonny’s child; and all their hopes for the future come tumbling down around them.

Jenkins takes his own sweet time over the narrative, skipping back and forth in chronology to hone in on key points in the couple’s relationship. We also spend time with Tish and Fonny’s respective parents and in particular, we focus on Tish’s mother, Sharon (Regina King) and her increasingly desperate attempts to prove Fonny’s innocence by travelling to Puerto Rico to confront the poor woman who has mistakenly identified Fonnyas her assailent. King’s performance has garnered the film a ‘best supporting actress’ Oscar nomination, along with Nicholas Britell’s score and Jenkins’ for best adapted screenplay. But this is essentially Tish and Fonny’s story and the two leads play their roles with absolute conviction.

There’s a rich, languorous intensity about If Beale Street Could Talk that really takes us inside the central characters, revealing everything we need to know about them and the way they relate to each other. If the glacial pace occasionally palls – the scenes where Fonny reconnects with his old friend Daniel (Bryan Tyree Henry) could have benefited from a little pruning – this is nonetheless a considerable achievement and something that in these times of short attention spans, we are rarely witness to. This puts me in mind of the films of the late, great Douglas Sirk, who worked in a similar way.

I love the film’s brutal honesty, refusing point blank to offer us anything resembling a convenient conclusion, pointing out that real life rarely comes with such luxuries attached – and for a young black man in America, justice is a commodity that’s very hard to find.

This may not be the absolute knockout that Moonlight was, but it’s nonetheless an engrossing and beautifully directed film that deserves the widest attention.