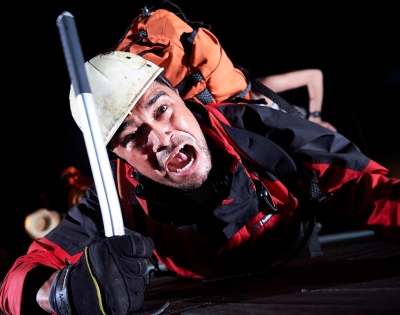 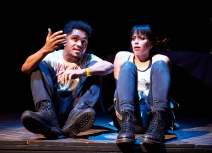 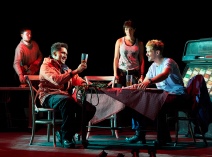 I have to confess that my first thought when I see this production advertised is, ‘How the hell are they ever going to put this on a stage?’

Anyone who has read Joe Simpson’s true account of his disastrous misadventure in the Peruvian Andes in 1985 – or seen Kevin MacDonald’s subsequent documentary – will know that Touching the Void is an epic story of adventure and survival against all the odds, with most of the action taking place on the remote peaks of an icebound mountain. The Lyceum has a reputation for inventive staging, but it’s clear from the get-go that this production will necessitate designer Ti Green and his crew to pull out all the stops.

David Greig’s canny adaptation begins – rather disturbingly for those who know the story – in a climber’s pub in Glencoe, where Joe Simpson’s sister, Sarah (Fiona Hampton), welcomes us all to her brother’s wake. She tells us she’s forgotten to make sandwiches and then cranks up the jukebox with a few eighties classics. Joe’s climbing partner, Simon (Edward Hayter), turns up, accompanied by the nerdy Richard (Patrick McNamee), the young man who served as assistant on Simon and Joe’s recent climb, and Sarah asks them for more information about what happened up on the mountain.

Simon begins by trying to explain the allure of mountain climbing by literally showing Sarah the ropes. They start small, by ascending an upended dining table, but pretty soon they are using ropes and winches to scramble up the sides of the proscenium arch. Sarah is astonished to find that she is enjoying the experience, but she still wants to know more…

And then Joe (Josh Williams) appears and, at the rear of the stage, a representation of the Peruvian mountain rears slowly into position so that Joe and Simon can re-enact their climb.

This is the point where the audience’s disbelief must be fully suspended if this is going to work – and I’m happy to report that it doeswork, quite brilliantly. Clambering about on a haphazard construction of metal and paper, the actors somehow manage to generate extraordinary levels of suspense, leading inexorably to the point where disaster occurs. It’s a heart-stopping moment, simply but convincingly staged.

If the play’s second half doesn’t quite fulfil the promise of the first, it is perhaps because it chooses to focus on the concept of solitude as a badly injured Joe is faced with the Herculean task of dragging himself back to base camp, accompanied only by a hallucinated version of Sarah, whose method of encouragement consists mostly of repeatedly whacking her brother’s broken leg with an ice axe. The characters of Simon and Richard are largely forgotten here and it might have helped to involve them a little more in the proceedings. Simon in particular seems poorly served. We never really share the feelings of guilt he must have had over what happened – indeed, we find out very little about what lurks behind his impassive expression.

That said, the story’s powerful conclusion, where we finally see the true grandeur of the mountain itself is undeniably exhilarating, and the four actors fully deserve their enthusiastic applause.

We’re all familiar with that famous quote about climbing a mountain ‘because it’s there.’ This production seems to live by a similar ethos, fearlessly tackling a subject that few theatre-makers would dare to attempt and, for the most part, taking it to dizzy heights.