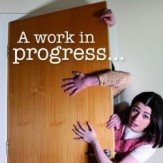 And so A Work in Progress is born: Hannah Morton’s play about two friends, John and Jane, who – after a brief prelude, where we are shown the spirit-crushing nightmare of failing auditions – barricade themselves into John’s flat, determined not to leave until they’ve had their Ruth Jones/James Cordon epiphany, and penned a veritable hit.

Morton, who stars alongside director Daniel Cullen, is an engaging performer, and there are some genuine laugh out loud moments here, notably the Porpoises in Space routines, which are wonderfully daft. The playful bickering between the two is nicely drawn, and Cullen has an appealing cheekiness, which helps create the atmosphere.

It’s a shame that the script focuses so much on banter, I think; I know the relationship is central to the piece, but there’s so much badinage that it becomes a little repetitive. I’d have liked to have seen them trying harder to write their play, to have been shown more of their putative scripts – a range of genres, for example, would have made the piece more varied and interesting to watch. There’s a bit of corpsing too, which is a pity – although it can, of course, happen to anyone, and maybe today is a one off.

It’s good to see young creatives making their own opportunities, and this piece is certainly good fun.