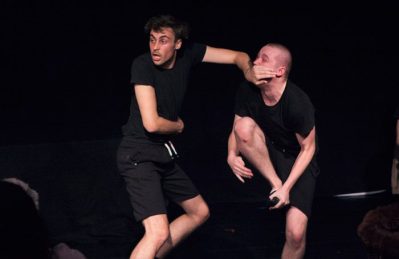 As you’ve probably already guessed, Willis & Vere’s A Serious Play about World War II is anything but serious. At the outset, however, it suggests that it fully intends to be. The play we are about to watch, we are gravely informed, is based on the life of Holocaust survivor, Hirshel Gunzberg. Not only that, he’s here tonight, sitting in the front row, an elderly bearded man in a yarmulke.

What follows is the theatrical equivalent of farting in a lift – wrong on so many levels. We watch a turgid attempt to portray Gunzberg’s youth, replete with slo-mo action sequences, inept racial stereotypes and lines of cringe-inducing dialogue, all interspersed with dramatic blackouts. It’s irreverently funny, and I find myself laughing out loud at incidents that really shouldn’t be suitable subjects for humour; I just can’t help myself. But I’m soon wondering how award-winning comics Adam Willis and George Vere are going to sustain this idea for a full hour.

The answer is, of course, that they don’t try. A sudden interruption from the audience (it seems that Mr Gunzberg is far from happy with the way he’s being depicted) sends the whole vehicle careering off the rails and into the realms of full-blown farce. As the two leads, and their hapless straight-faced sidekick, Ian Coulter, run around like headless chickens trying to defuse a desperate situation, incident piles upon incident, ramping up the potential disaster to almost unbearable levels. The sudden appearance of two police officers, sent to investigate ‘a disturbance,’ adds an extra layer to the mayhem. We are made complicit in the deception, repeatedly warned not to tell anyone what we’ve seen.

We are subsequently treated to a whole series of unexpected events: gunshot wounds, murder, dismemberment, nudity, super glue, handcuffs, power tools… it’s quite a list and, happily, no opportunity to up the stakes is left unplundered.

The result is one of the funniest shows I’ve seen at this year’s Fringe. A serious play? They’re ‘avin’ a larf. And so, I believe, will you.