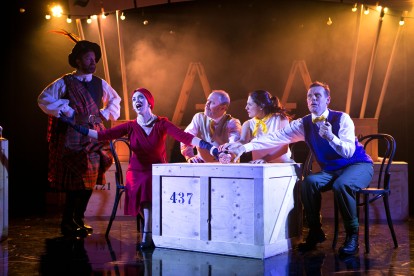 The Sunshine Ghost, a co-production between Scottish Theatre Producers and the Festival and King’s Theatres in Edinburgh, is a brand-spanking new musical, performed with wit and vigour by its small cast.

Directed by Ken Alexander, it’s a convoluted, melodramatic tale, featuring love and loss, castles and ghosts – with lots of laughs along the way. We meet the cursed ghost Ranald MacKinnon (John Kielty), two hundred years dead, and doomed to haunt his family’s castle until an old wrong is avenged. And we meet the woman he falls in love with, the very-much-alive American archaeologist, Jacqueline Duval (Neshla Caplan), daughter of billionaire property tycoon, Glen Duval (Barrie Hunter). Before Jacqueline can stop him, her boorish father is buying MacKinnon Castle and shipping it stone-by-stone to the USA, all to curry favour with his latest amour, the repulsive media-astrologer, Astrobeth (played with real relish by Helen Logan). Can Ranald save his ancestral home and break the curse that binds him to it? Can the hapless caretaker, Lachlan (Andy Cannon, who co-wrote the play), do anything to help? Here, nothing is as it seems, and the resolution, when it comes, is sure to take you by surprise.

This is a thoroughly enjoyable piece of musical theatre, hindered only by a peponderance of exposition in the first act, and the inevitable limitations of a single piano (masterfully played by Richard Ferguson, who also wrote the score, but without the depth of a full band or orchestra). It’s a silly spoof, a daft extravagance, and the cast play up these elements with obvious glee. There are lots of cheeky little techniques employed with a knowing wink: a sheet cunningly moved to allow a shock reveal; a homage to Beetlejuice in the possession scene. Helen Logan’s Astrobeth is the standout performance (it’s a gift of a role, perfect for comic exaggeration), but the whole cast works well, and it’s a whole lot of fun.

A most enjoyable evening at the theatre.