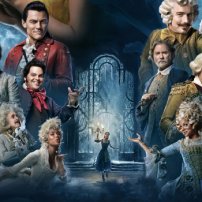 We’re a little late to the party on this one, finally sitting down to watch Disney’s live action remake of Beauty and the Beast almost a full month after its UK release. Still, even without our patronage, it’s been a rip-roaring success, and so we’re able to pick from a plethora of performance times at our local Cineworld, despite the passage of time.

And it’s easy to see why this film has been so well-received. It’s lovely. Emma Watson is a perfect Belle for the modern age, conferring a sense of agency and autonomy without undermining the source material. And the CGI animations are just so very Disney – cheeky and cute and oozing personality. Sure, there’s an enchanted castle full of emotional manipulation here, but would we have it any other way?

I can’t compare this new version to the much-loved cartoon, because – gasp! – I’ve never seen the earlier incarnation of the tale. Philip tells me that it’s pretty much a frame-by-frame copy, with only subtle changes applied to reflect twenty-first century ideologies. For example, the much-vaunted ‘openly gay character’ turns out to be Le Fou, whose homosexuality is a lot less ‘open’ than I’d imagined from the on-line fervour it elicited (admiration for Gaston, and a flirtatious glance during the finale dance). I guess it’s a step in the right direction, but it seems unnecessarily restrained. This is 2017. LGBTQ characters don’t need to be so hidden and covert, do they? Still, even baby steps move us forward – and this is a film with a good heart.

Dan Stevens imbues the Beast with a deep humanity; Luke Evans relishes in denying Gaston has a heart at all. Both male leads are played with real aplomb, nimbly treading the fine line between stock-character and depth. I’m particularly fond of Kevin Kline’s bumbling Maurice; he’s just so incredibly appealing despite his neediness – no wonder Belle feels so responsible for him.

The music is great – memorable and catchy and beautifully performed (is there anything Watson can’t do?). And the choreography of the crowd scenes is truly breathtaking. This is Disney doing what Disney does, with such confidence and assurance that success was always inevitable.