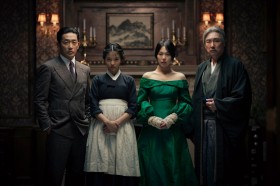 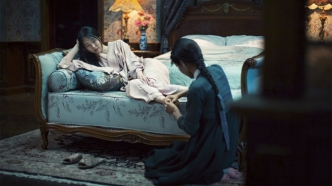 The term ‘masterpiece’ is often used but I’ve rarely seen a film more deserving of that word that Park Chan-wook’s The Handmaiden. It’s a sumptuous, sensual and occasionally audacious slice of melodrama, a loose adaptation of Sarah Water’s novel, Fingersmith. That book, of course, is set in Victorian London, but here the story is transposed to Korea in the 1930s, when the country was under Japanese occupation. To say that the adaptation works well, would be an understatement. It’s an inspired idea that plays like a dream.

Sookee (Tae-re Kim) is hired to be the handmaiden to reclusive Japanese heiress, Lady Hideko (Min-hee Kim) and the two women quickly form a powerful bond, one that develops into a full-blown relationship. To say any more about the plot would do the film a disservice; suffice to say, that some way into proceedings, we flash back to scenes we only glimpsed in the film’s opening moments and are given more information – Sookee’s employment, it turns out, is not as innocent as it might at first appear. From this point, Park Chan-wook seems to delight in constantly pulling the rug out from under us. No sooner have we begun to accept a new tranche of information, then we are obliged to rethink it as earlier scenes are revisited with the addition of a few small points we missed out on first time around. It’s a brilliant technique and, despite this being the extended Director’s Cut, nearly three hours in duration, the film never loses momentum, but holds you spellbound for its entire run.

Those of a prudish persuasion should be warned that The Handmaiden is an unashamedly erotic movie – there are explicit sexual scenes here that fully test the boundaries of that 18 certificate, but it’s important to say that this aspect of the film never feels prurient – indeed, the relationship between Sookee and Hideko is perhaps the most joyful and ‘pure’ aspect of the story. Contrast it with the conduct of the male protagonists: the cunning and deceitful Count Fujiwara (Jung-woo Hah) – who weaves a merciless tangled web in order to enrich himself – and the frankly repellent Uncle Kouzuki (Jin-woong Jo) – a man who has devoted his life to the pursuit of printed pornography and who has made his niece, Hideko, do unspeakable things from childhood; the true love the women share is something to be celebrated.

And this sensual quality goes further than just the sex scenes. It’s in pretty much every frame of the lush cinematography, the gorgeous period costumes, the musical score. Korean movies are currently making waves across the film industry, but The Handmaiden has everything it needs to create a real tsunami. And a masterpiece? Oh, yes, most assuredly. If this comes to a big screen anywhere near you, don’t miss it.