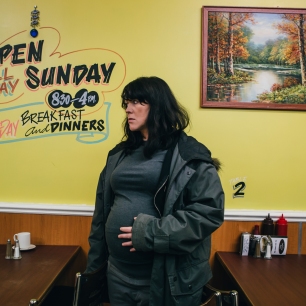 Prevenge belongs to Alice Lowe. She’s the writer, director and the star – and the resultant singularity of vision gives this film a rare clarity. Truly, it’s a pleasure to watch this darkly funny tale, even if there are moments of such gruesomeness that I have to hide my eyes.

Ruth is a young widow, pregnant and enraged. Spurred on (she believes) by her unborn baby, she embarks on a killing spree, murdering her victims with ruthless determination. They include odious 70s music DJ, Dan (Tom Davis), workaholic CEO, Ella (Kate Dickie), and likeable climbing instructor, Tom (Kayvan Novak). Interspersed with visits to the midwife, these homicidal incidents grow ever more violent, yet – despite her obvious moral deficiencies – we remain firmly on Ruth’s side. She’s not likeable exactly – and why should she be? But her humanity is writ large; she’s an ordinary woman, with the same flaws and over-reactions that affect all of us. She just takes things to extremes, that’s all.

Lowe uses the obviously low-budget to her advantage: the film has a claustrophobic feel as we’re stuck with Ruth in cheap hotel rooms, the corner of a bar, another victim’s living room. The episodic structure means that it’s essentially a series of two-handers, but this plays to the story, and helps to underline Ruth’s isolation. The only constant in her life is the midwife. It’s a tragedy, I suppose – but a very funny one.

This screening is part of a Q and A tour, so we have the added pleasure of hearing Lowe speak about her project. Her enthusiasm is infectious, and it’s fascinating to hear how the idea for the film emerged: “A funding opportunity came up, and I thought, ‘Oh, but I’m pregnant, so I can’t…’ And  then I started to think about what I could do that would include my pregnancy.” Like all the best creative pieces, then, this is a mixture of talent, experience and happenstance. You won’t see another film quite like it. It’s well worth a visit to your local cinema.