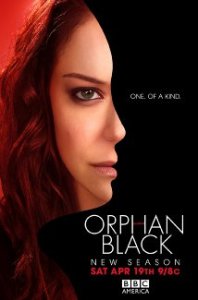 It’s always a joy to discover a new, long-running series and Orphan Black has been our big discovery of 2015. Hard to categorise (a scientific thriller, perhaps? A conspiracy mystery?) and even harder to anticipate, the first series gripped from the very first moments and kept us in it’s clutches right up to the final shot, then left us with a cliff hanger that almost defied us not to check out Series Two. This one took the lovingly crafted ball created by John Fawcett and Graeme Manson and ran with it, proving if anything to be even more riveting than the original.

Steet-wise hustler, Sarah Manning (Tatiana Maslany) finds herself in a sticky situation at a New York tube station one night. On the run from people who she owes money too and being sought by her low-life drug dealing boyfriend,Vic (Michael Mando) she witnesses a suicide. A woman jumps in front of a train, but not before Sarah has seen that the stranger is her exact double. Without time to think, Sarah grabs the woman’s handbag and runs off with it, intending to assume her identity and thus get herself out of trouble. But she soon discovers that the jumper was a police woman and that she wasn’t the only double that Sarah has out there. In fact there are a lot off them. Aided by her cheeky, rent boy foster brother, Felix (Jordan Gavaris) Sarah sets about unravelling the mystery… and begins to discover how deep this particular rabbit hole can go…

There’s so much to enjoy in this series, not the least Maslany herself who proves to be an exceptional actress, confidently playing at least six main characters (and quite a lot of minor ones) and managing to give each and every one of them a different persona – in a scene where one character is impersonating another, there’s never any confusion as to who is who, while her performance as uptight ‘soccer mom’ Alison, often had me laughing out loud. Gavaris’s turn as Felix is also priceless – so much more than just comic relief, he manages to convey everything with a withering look and a sarcastic one liner.

The writers keep up incredible momentum, thrusting us from one thrill ride to the next, constantly keeping us off balance and repeatedly pulling the carpet from under our feet. Furthermore they venture into areas where few other companies would dare to tread. Also this is Paranoia Central. Just when you think matters are in danger of flagging, the next conspiracy comes lurching out of the wings to hit you square in the kisser.

Moreish? Oh yes. Try it. Go on, we dare you. Trust me, you won’t be disappointed. Meanwhile, a Series Three is on it’s way…