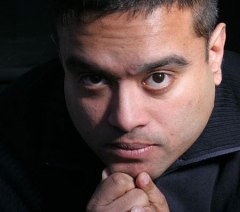 We have rarely been in such dire need of a good laugh.

It’s June 24th and we’ve recently heard about Brexit. There’s a sense of gathering doom in the air, so we decide to head down to the Comedy Store in a desperate search for something to lighten the mood. Luckily, we’ve chosen the right night to do it as this is hands-down, the best gig we’ve seen here in a very long time.

Our compere for the evening is John Maloney, who I haven’t seen before. He’s clearly in no mood to take prisoners and deals harshly with the members of an over-enthusiastic stag party who keep shouting out inappropriate comments through his introduction. Before much longer, the ringleaders are led out by a couple of bouncers and they don’t return. Maloney offers some spectacularly crude observations about married life that stay just the right side of funny.

The first act proper is John Warburton, an affable, bespectacled comic with a nice line in audience participation. He soon has the crowd on his side and laughing along with him as he takes us through a protracted piece about how his wife gave him the ‘wonderful gift’ of a new pregnancy for his birthday – trouble is, he was expecting an iPhone. There’s also a surreal story about potatoes purchased from Aldi, which turn feral and take control of his kitchen. The story finally culminates in a terrible joke – but it was great fun getting there.

Next up there’s a ten minute slot from relative newbie, Tom Taylor. He’s a revelation, shambling on with an electric keyboard under his arm, gurning and giggling neurotically, fiddling endlessly with a microphone stand and delivering a series of quirky little songs, with playfully clunky lyrics. He’s absolutely brilliant. Could this character-driven comedy work over a longer set? Probably, particularly if he’s got other personae hidden up his sleeve. But for the ten minutes he’s on, he has everyone laughing fit to bust and goes straight into the file marked ‘one to watch.’

Zoe Lyons is up next and her confident and assured set confirms that this is going to be a very good night indeed. Her scattershot subjects include her reluctance to share food in tapas bars, trying to pack a suitcase in Amsterdam, whilst stoned and her recent experiences in the beauty department of Harvey Nichols. “What is your daily cleansing routine?” she’s asked by one ‘beauty consultant. ‘Well, I look in the mirror in the morning and if there’s no egg on my chin, no gravy in my eyebrows and no vomit in my hair, I’m good to go!’ Priceless. Great too, to see a female comic in a venue that doesn’t always feature its fair share of women performers.

After a short break to top up our alcohol levels, there’s a beautifully crafted set from Paul Sinha, who as well as being a stand up comedian, also plays a role as a ‘Catcher’ on the TV quiz show, The Chase. (He also does a cracking radio programme called History Revision, which is definitely worth seeking out online.) Sinha’s comedy is clever and incisive, built around his self-proclaimed role as the UKs only gay-Asian-quiz-show-host-stand-up with a predilection for rough sex with aggressive Northern men. He tells us he’ll be in his element tonight, getting a cab back to his hotel. Excellent stuff.

On any other night, headliner Jarred Christmas would have been considered a triumph, but after the embarrassment of riches we’ve already enjoyed, his set feels somehow like a bit of an anti-climax. Don’t get me wrong, there’s nothing to fault in his delivery and his frenetic, super-charged persona, it’s just that much of the material he employs here (the potential minefield of being a parent, for instance) seems a little over familiar. But when the night’s most underwhelming act still manages to qualify as ‘pretty good’ you know you’ve attended a great show. The Comedy Store doesn’t always live up to its much-vaunted reputation, but tonight, when it was sorely needed, happily, it did.