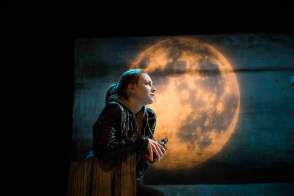 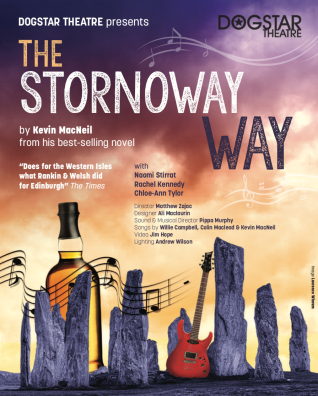 Adapted by Kevin MacNeil from his 2005 novel, The Stornoway Way is the story of Roman (Naomi Stirrat), a would-be singer-songwriter living on the remote Isle of Lewis. Roman dreams of making the big time, but can’t seem to prise himself away from the whisky bottle long enough to put any constructive plans into action.

When his best friend Eilidh (Rachel Kennedy) offers to fund a trip to Edinburgh so Roman can spend time in a recording studio, he happily goes along with the scheme – but then he meets Hungarian student, Eva (Chloe-Ann Taylor), in an Edinburgh bar, and things become more complicated. And the whisky bottle is still exerting its tenacious pull.

The three actors put in spirited performances here but are hampered by a script that never manages to rise above the inescapable fact that the central character is a self-pitying wreck of a man. It’s usual in such stories to expect a little redemption along the way, but it’s in short supply here.

Still. it’s not all bad news.

There are pleasing elements: the folky songs featuring Gaelic lyrics (with an onscreen English translation) give proceedings an occasional lift, and the sly quips exchanged by the Lewis islanders in the first half elicit knowing laughter from the audience. Matthew Zajac’s direction is nicely done and there’s a handsome set courtesy of Ali Maclaurin. But it’s puzzling that, despite its title, most of the story unfolds not on the Isle of Lewis, but in Edinburgh. And in the second half, Roman’s relentless journey towards self-destruction begins to pall.

I’ve no doubt that the novel, written from the lead character’s cynical point of view, works a good deal more successfully than this rather scattershot adaptation. And, no matter how spirited a performance Stirrat gives us, she cannot convince me that anybody would offer this toxic male the time of day.