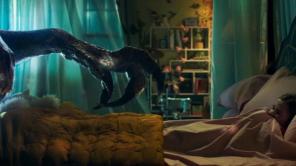 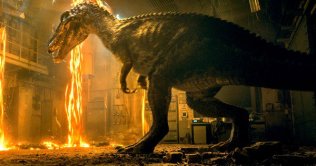 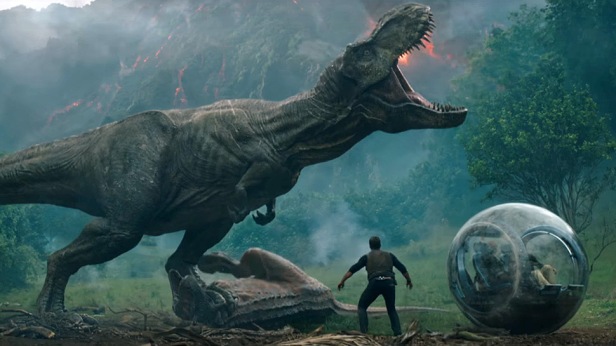 Another day, another instalment of a well-worn movie franchise.

I’ll be honest with you, when I first heard about this, I wasn’t overly inclined to bother with it. Colin Trevorrow’s Jurassic World (2015) was okay, but nothing in it instilled in me the appetite for another monster helping. But then I noticed, that this time out, the movie was to be directed by J A Bayona and my curiosity was aroused. I’ve admired his three previous offerings, all very different beasts – The Orphanage, The Impossible and A Monster Calls, exceptional films, every one. Could he possibly bring something new to the table?

Fallen Kingdom begins with news that the ex-theme park of Isla Nubla, now a dinosaur haven, is in big trouble. The island’s resident volcano has decided to blow its top and its saurian inhabitants appear to be doomed to extinction all over again. John Hammond’s former partner, Benjamin Lockwood (James Cromwell) has devised a rescue mission, which means that eleven different species will be captured and shipped off to a new, safe haven. Lockwood is terminally ill so the organisation of this complex mission has been left to his young assistant, Eli Mills (Rafe Spall), a man we just know at a glance is not entirely trustworthy. Mills calls in Clare Dearing (Bryce Dallas Howard) to help with the mission and she enlists former love interest, Owen Grady (Chris Pratt, as affable as ever), to assist her. With a couple of young associates in tow, they head off to Isla Nubla. (The good news is that Clare actually remembers to pack some sensible footwear this time!) Once on the island, they quickly discover that the mission is nothing like as straightforward as they originally supposed…

All right, so the first third of the movie is beautifully filmed and there are some decent people-versus-lava scenes. The dinosaurs are state-of-the-art CGI and, though there’s nothing here to disgrace Stephen Spielberg’s game-changing original, neither is there very much in the way of surprises. Indeed, this first section is haunted by that most deadly of dinosaurs, the Nothingnewbeforeus. Isla Nubla goes up in smoke and I start to think that this is the fate that’s inevitably going to befall the franchise.

But then the action shifts to Benjamin Lockwood’s estate in California and the film instantly takes a big step up, heading in a different, and much more compelling direction. The idea here is that no matter how well intended an original idea is, there are ruthless people waiting in the wings, ready to step in and monetise it. In comes the ever-dependable Toby Jones as Gunnar Eversol, a smug and utterly repellant dino auctioneer. He’s there to sell off the ‘rescued’ creatures to the highest bidder. There’s also a new addition amongst the specimens, a hybrid dinosaur called the Indoraptor,  a super killing machine that’s just crying out to to be ‘weaponised.’

When the auction goes a bit haywire, Bayona ramps up the suspense to almost unbearable levels and, there are some scenes that ride very close to the wind in terms of the film’s 12A rating. Best of all, there’s a fabulous sequence where Lockwood’s granddaughter hides in her bedroom, as the Indoraptor resolutely makes its way towards her. Bayona uses shadows and music to create something both menacing and enchanting – like a dark Grimm’s fairy tale with the wolf replaced by the most terrifying creature imaginable. If the film had all been as good as this, we’d be talking a much higher star rating.

Still, against all the odds, Bayona has managed to imprint his own DNA into this over-familiar franchise and in so doing, has created his own hybrid beast. The concluding announcement of yet another new direction for the series seems suddenly a much more interesting proposition. If they can get Bayona to direct, I for one, am in.