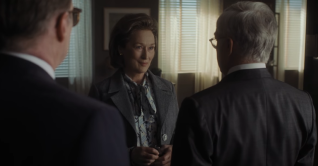 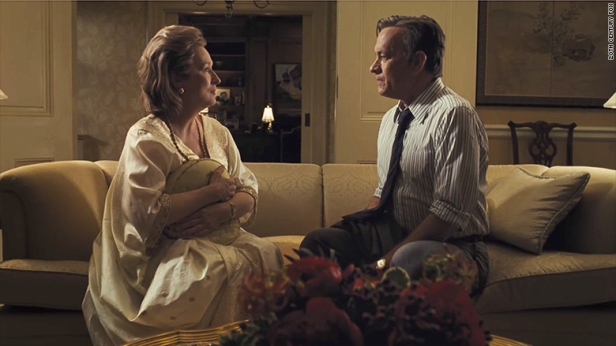 In the era of fake news, here’s an interesting concept – a film about real news. More specifically, a film about a newspaper’s quest to tell the truth that doesn’t come across as some kind of hollow joke. There was a time, it seems, when newspapers were prepared to risk everything to fight for the right to free speech, and that time was 1971.

Stephen Spielberg’s The Post may be set in the past but its story couldn’t be more prescient. We’ve recently had the Paradise Papers, but back then it was The Pentagon Papers, a series of purloined documents that proved that President Nixon’s administration – and indeed, many others before it – had lied to the American public about the Vietnam war, insisting that it was a winnable cause even when they all knew full well it wasn’t. This secret sent untold numbers of young soldiers to their deaths.

When reporter Daniel Elisberg (Matthew Rhys) learns of this, he decides to turn whistleblower, stealing a bundle of secret government files and handing them over to the New York Times. They have every intention of publishing the story, but Tricky Dicky gets wind of their plans and serves them with an injunction, forbidding them to go to print. The files subsequently find their way onto the desk of a reporter for the Washington Post. Editor Ben Bradlee (Tom Hanks) is eager to get the scoop, but first he must convince the Post’s owner, Kay Graham (Meryl Streep) to give him the green light. Graham is struggling to assert her authority at The Post just as it prepares itself to float on the stock market. Having inherited her position from her late husband, Kay finds herself continually marginalised, lectured and talked down to by her male employees – and, she’s all too aware that publishing the banned documents could land her and Bradlee in jail and finish off the newspaper once and for all…

The Post is a compelling piece of docudrama, helmed by a director at the peak of his powers – it’s sobering to note that Spielberg made this film largely because he had a few weeks to kill whilst waiting for the special effect shots in his upcoming Ready Player One to be processed. Given the quick turnaround, it’s astonishing that the film is as assured as it is. Furthermore, Spielberg has managed to pull in two of Hollywood’s major power players for his lead roles. Amazingly, Streep and Hanks have never made a film together until now.

What’s most fascinating here is to note how the publishing process has changed over the decades. Spielberg’s cameras linger almost voyeuristically over the process as the ‘hot metal’ printing presses are tortuously put together – and I love the scene where reporter Bob Bagdikien (Bob Odenkirk) attempts to make a covert call from a street pay phone, his nickels and dimes raining onto the pavement as he talks. Hanks is great as the news-hungry Bradlee and Streep gives an object lesson in understatement as Graham. The scene where she finally tells the men in suits what they can do is priceless. Make no mistake, this is also a feminist film in the truest sense of the word.

Having said all this, I don’t see The Post bothering Oscar too much this year – there are simply more exciting offerings to choose from. But – in its quiet, unassuming way – this is an important release that has plenty to say about the way government’s operate and how important it is to preserve the right to bring their actions to the public’s attention. Sadly, these are qualities that we are in danger of losing altogether. The events in this film eventually led to the impeachment of a President. What would it take, I wonder, to achieve a similar outcome now?

Stephen Spielberg wears two hats. There’s the backwards baseball cap he wears when he’s directing superior popcorn entertainments like Indiana Jones and Jurassic Park – and sometimes, he reaches into the back of the wardrobe and pulls out a sombre black homburg, which is his hatwear of choice when helming ‘darker’ material like Schindler’s List and Munich. Bridge of Spies is definitely a homburg movie, but in its quiet own way, its as gripping and involving as any of his other films. Spielberg has the uncanny ability to take the most complex story and tell it with effortless style, making it accessible and involving.

It’s 1957 and the ‘Cold War’ between America and Russia is at its height. Rudolf Abel (Mark Rylance) an apparently innocuous amateur artist is arrested on a charge of spying for the USSR. He is, arguably, the most hated man in America. Veteran lawyer, James B. Donovan (Tom Hanks) is assigned to defend him, mainly because the law must be observed and despite the fact that even the judge on the case openly declares that Abel should be found guilty. But Donovan is a liberal, who believes implicitly in the American constitution. He fights Abel’s case (unsuccessfully) through the courts and finds himself vilified for doing so – but he does manage to prevent him from going to the electric chair, pointing out that Abel might be a useful bargaining tool in the future.

Sure enough, shortly afterwards, American pilot, Francis Gary Powers is shot down whilst carrying out a spy mission over Russian territory. He’s taken prisoner and the CIA are terrified that he might be persuaded to leak the secrets of the U2 spy plane. A possible exchange of prisoners is mooted and once again, Donovan is recruited to head out to East Berlin to negotiate the exchange…

This is a beautifully made film, that brilliantly invokes the austere look of the era and provides a fresh perspective on the business of espionage. Hanks is perfectly cast as the American everyman, a role that would have been played by James Stewart back in the day, his chunky features emanating absolute integrity. Rylance, meanwhile, as the dry, sardonic Abel gives a masterclass in acting. Together, the two actors strike sparks off each other and they are aided and abetted by a razor sharp script, created by Matt Charman and the Coen Brothers.

There’s little to dislike here and plenty to admire. It’s essentially a ‘small’ movie, which tells its story with skill and precision and never puts a foot wrong. As the story moves towards its conclusion, it bills up levels of suspense that will have you twitching in your seat.

Spielberg wears both his hats with equal success but I have to say, I do prefer him in the homburg.