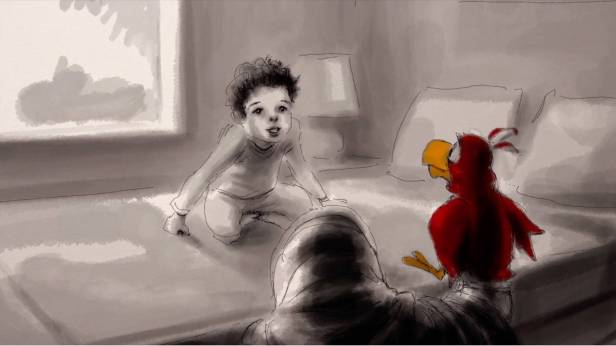 Owen Suskind is autistic. He’s also a huge fan of Disney animations – and this passion has saved him from an isolated life.

This documentary, based on a book by Owen’s newspaper journalist father, is beautifully directed by Roger Ross Williams, with a lightness of touch that allows Owen to shine. And shine he does.

This could have been a tragic tale. Owen’s parents, Cordelia and Ron, tell of their despair when they realised that Owen, aged three, was regressing; their fear that their son was lost somewhere inside himself, losing both his physical and cognitive skills, losing his ability to communicate. Like all parents would, they did their best to help him, taking him to a range of specialists and learning all they could about his condition. But nothing seemed to work. The only thing that kept him calm, kept him happy, was watching Disney animations. And so he watched a lot of them.

And then, one day, Ron realised that Owen could communicate if he used the language of the cartoons, that he’d been using the films to make sense of the world. And this was the breakthrough they needed to help Owen access society again.

Of course it’s not all plain sailing; Owen still faces huge obstacles, and the documentary does not gloss over these. But he’s out there, growing up, learning to live independently, and experiencing all the highs and lows of a human life. And yeah, he’s lucky: his family is wealthy, intelligent, stable and well-connected, so he has an awful lot of the right kind of support. And thank goodness for that. Because Owen Suskind has a lot to offer the world and it would have been a tragedy if he’d stayed locked inside himself.

Funny, heartbreaking, uplifting and educational. Really, this is a must-see film, and a late contender for one of our favourites of the year.