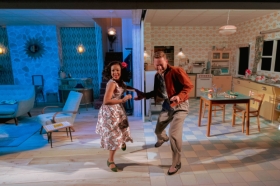 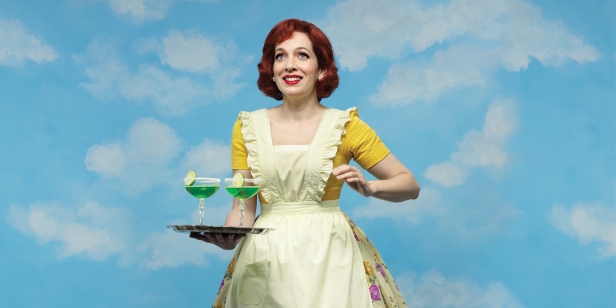 What’s this? A trip to the homeland to visit family that coincides with a chance to see the world première of Laura Wade’s latest play before it transfers to the National at the end of the month? Perfect timing! Four tickets, please. For the Saturday matinee.

It’s a sunny day, so we pack some fruit and sandwiches to take with us. Theatr Clwyd is in Yr Wyddgrug (aka the more prosaic ‘Mold’), and there are picnic tables outside, with panoramic views over the Clwydian hills. It’s a lovely place to sit and eat our lunch before we venture indoors. This is a bustling regional arts centre, with three theatres, a cinema and a function room, as well as a shop, bar, and bistro cafe. Neither Philip nor I have been here for a while, so we spend some time exclaiming over changes, and reminiscing about the past (factoid: Philip’s band, Hieronymous Bosch, used to play here, providing the music for youth theatre productions such as Godspell back in the day). We’re with my parents and, as mum walks with a zimmer frame, we’re pleased to note that the venue is pretty accessible, and that the staff are friendly and willing to help, e.g. with storing her wheels while we watch the play.

And what a play! We’re so glad we’ve come, even though there are blue skies outside and mum and dad are missing England defeating Sweden in the football word cup (we’re missing it too, of course, but we wouldn’t have watched anyway).

Katherine Parkinson stars as Judy, a woman obsessed with the 1950s. She met her husband, Johnny (Richard Harrington, or – as he’ll always be known in this house – DI Mattias) at a vintage car convention; their clothes and home decor are all authentic detritus from the decade they love so much. But paraphenalia isn’t enough to satisfy Judy and Johnny’s obsession; unlike their best friends, Fran (Kathryn Drysdale) and Marcus (Barnaby Kay), who just like the 50s aesthetic, the dancing and the airstream caravans, Johnny and Judy choose to model their whole lives around the fantasy, embracing – as Judy’s mother (Siân Thomas) says – a strange nostalgia for a time they never knew. Judy’s redundancy (she’s been working in finance and hating every minute) is the catalyst for their whole-hearted immersion; she will become a traditional housewife, making everything from scratch, keeping their home perfect. Meanwhile, Johnny will continue to work, but – when he comes home – it will be to warm slippers and a cocktail, a clean house and a fragrant wife. He takes some persuading – this is Judy’s dream, really – but he knows she’s unhappy in her job, and he can’t pretend he isn’t drawn to the idea of being waited on. It sounds great, right?

Except, of course, that it isn’t real. This isn’t the 1950s and this is not what life is like. Indeed, again according to Judy’s wonderfully acerbic and impatient mother – Siân Thomas is clearly relishing this role – this is not even what life was like in the actual 1950s. It’s a sanitised, glamourised version, an ideal that glosses over myriad inconvenient details. And, when Johnny’s new boss (Sara Gregory) fails to honour the promotion he’s been promised by her predecessor, Judy’s carefully constructed edifice is threatened by the humdrum irritant of ‘not having enough money to pay the mortgage or the bills.’

It’s a clever play, this, with a lot to say. Through Judy’s brittle fetishisation of the past, we get to analyse the gender politics of the modern age, to see that traditional gender roles don’t make men happy either; they’re no good for any of us. The rise of the alt-right means we’re being dragged backwards, losing rights hard-won by those who came before us. This play lays bare the problem with rose-tinted reminiscence, with cherry-picking details that seem appealing to us now. It also looks at the present with an eye that matches Judy’s gimlet cocktail, with nods to #metoo and eroding workers’ rights. Under Tamara Harvey’s direction, the performances are note-perfect, six complex, rounded characters with believable relationships.

I like the set, designed by Anna Fleischle: a doll’s house construction with a front wall that’s opened out as the play starts, all yellow kitchen and pineapple ice-buckets, flamingo shower curtains and muslin bottle tops. And the transitions between scenes are audacious, choreographed by Charlotte Broom, the jive entwined with prop-positioning.

If you’re in or near North Wales, you really should try to catch this before it makes the move to London – you’ve got until Friday. If not, it’s worth the trip to England’s capital.