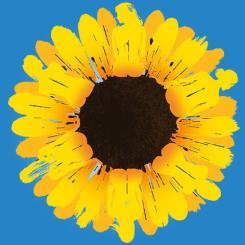 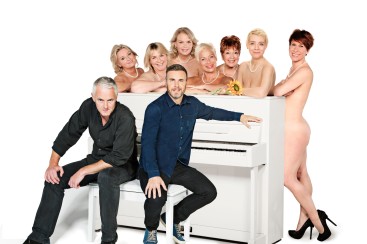 As the curtains rise at the Festival Theatre, we can’t help but notice that the look of this production has changed considerably since we first saw it in Manchester in January 2015. Back then, Tim Firth’s latest version of this story was known simply as The Girls, and the set comprised a huge heap of lockers, piled higgledy-piggly one on top of another. Now, we find ourselves looking at a rather fabulous Yorkshire landscape, where a stone wall and a gate overlook a surprisingly convincing valley, complete with woodland and a picturesque cottage. At various points, that landscape opens up wider perspectives, as though stretching itself towards new horizons. The script has been worked on too, though it remains unremittingly focused on a small town in Yorkshire and on the close-knit community that lives there. Calendar Girls is, after all, based on real life.

Annie (Anna-Jane Casey)’s husband, John (Phil Corbitt), is suffering from leukaemia. As he goes steadfastly through chemotherapy, assuring his wife that everything will be fine, she relies heavily on her best friend, Chris (Rebecca Storm), and on the local WI, whose meetings are presided over by the officious Marie (Fern Britton, who – despite never having really acted before – is clearly a natural: funny and charismatic in the role). Marie is strictly old school, a  ‘jam and Jerusalem’ diehard who seems intent on keeping her members strictly in line. But, when tragedy inevitably strikes, Chris comes up with a novel way of raising money for a memorial – but how far are the other members of the group prepared to go in order to back her up?

The truth is, we all know exactly how far: the Knapely WI’s nude calendar was an international phenomenon. So there are no surprises here – but that’s really not the point. What we have is a beautifully articulated tale of humanity: of life and death and love and loss, of generations learning to accept each other, and people working together to support one another, through all the trials and tribulations thrown their way.

There’s a real sense here – more signposted than in the previous version – of transience: the seasons’ passing is illustrated by changing light and blossoming trees; there’s a slow recognition that the current crop of teenagers should be allowed their indiscretions, that time will turn them into adults soon enough; they’ll turn out okay, just like their parents have.  It’s a truly heartwarming piece, with community at its core.

The music complements the story perfectly, illuminating the characters’ lives. And it’s memorable too (well, of course it is: if there’s one thing Gary Barlow knows how to do, it’s how to write a hit song). There are melancholy ballads here – the story demands them, and they’re genuinely emotive – but there’s an overwhelmingly upbeat mood to the whole piece, a lively positivity that means we’re smiling through our tears. Not all of the performers are stellar singers, but it’s cleverly cast, so that the most demanding songs are sung by those who really can do them justice, with AJ Casey, Rebecca Storm and Karen Dunbar (Cora, the vicar’s daughter and reluctant organist) all showing they have exactly what it takes. The choral numbers are impressive too.

This is feelgood theatre at its best – and you’re bound to leave the auditorium humming, with the sound of ‘Yorkshire’ in your head.