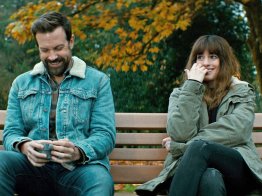 To say that Nacho Vigalondo’s Colossal is unusual would be something of an understatement; as an indie slacker-flick about a kooky American woman and, um, a rampaging monster in South Korea, it is a genre-defying delight, and certainly the most original film I’ve seen in a long while.

Anne Hathaway stars as kooky woman, Gloria, whose life is spiralling out of control. She’s lost her job and she’s drinking too much, and her boyfriend, Tim (Dan Stevens), is getting sick of her. Hathaway aces the role; she’s convincingly shambolic without being a complete wastrel. It’s easy to relate to Gloria.

When self-righteous Tim decides – self-righteously – that enough is enough, he kicks Gloria out of their New York apartment, and she returns to her childhood home. The house is empty, pending rental: her parents have moved away. And so she is alone, taking stock, and revisiting her past.

When she bumps into her old friend, Oscar (Jason Sudeikis), things start to look up. He offers her a job in his bar, and they hang out together after hours, drinking and catching up. Okay, so it’s a drifting, going-nowhere lifestyle choice, but it’s not so bad. They like each other. They’re having fun.

But Gloria’s chilled-out demeanour masks a growing anger deep inside. Old memories are resurfacing, and the booze can only blot them out for so long. When she sees news footage of a strange monster attacking Seoul, she’s appalled. And even more so when she realises that the monster is a part of her, unleashed upon the unwitting citizens of a city far away. She has to learn to control – rather than suppress – her rage, if she wants to stop its destructive manifestation.

I know, it sounds bonkers. And it is. It’s also bleakly funny and startlingly profound. Sudeikis’s performance as Oscar is beautifully nuanced, his sly abusive disposition gradually revealed. He’s the real monster: an angry, bitter robot of a man, used to controlling those around him. Gloria can only beat him by cutting him down to size – and there’s only one way she can do that. The monster is her twin, her Hyde, her Frankenstein. She has to own it, subvert it to her will.

Oh, look, I could go on for ages here. I found this whole film fascinating. A real gem. Go on, watch it.