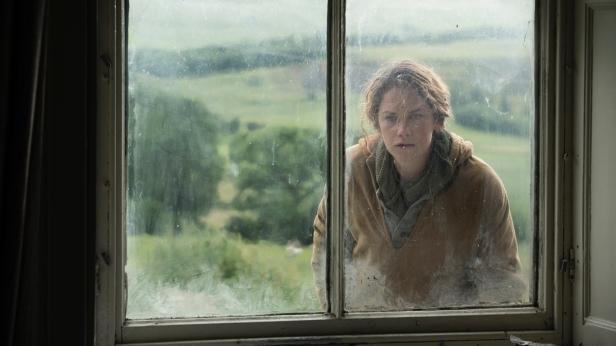 There’s a lot to admire about Dark River, not least its cast list, with Ruth Wilson, Mark Stanley and Sean Bean all demonstrating exactly why they’re such acclaimed actors. They deserve our respect. Because this bleak and brutal tale depends entirely on their ability to create empathetic characters, to convey their muted misery with nuance and subtlety. Perhaps inevitably, the film has drawn comparisons with God’s Own Country, with which it shares the stark landscape of rural Yorkshire, but – beyond the superficial, they have little in common: Francis Lee’s debut is essentially a love story, while this Clio Barnard film is a harrowing family drama.

We first meet Alice (Wilson) earning her crust as a migrant farm hand, seemingly happy in her work despite its rigours. She’s confident and competent, well-liked by her colleagues. ‘There’s always work for you here,’ her boss assures her, but she’s leaving anyway. Her father has died; she’s going home to the family farm – the one he promised would be hers one day. But of course, it’s not as straightforward as that. Home is a complicated place, and Dad (a virtually silent Sean Bean) is still a looming presence, despite his recent demise. What’s more, Joe (Stanley), Alice’s brother, has other ideas. He’s been working this land for most of his life, and believes he has the greater claim on it, despite the fact that he’s let the place go to rack and ruin and spends much of his time  drinking away his dissatisfaction.

And besides, it’s almost a moot point. They don’t even own the farm; they’re just tenants. The best either of them can hope for is to be granted the tenancy, which seems unlikely as property developers are already sniffing around, sensing an opportunity to make some money.

The half-buried secrets and unspoken resentments eventually boil over into violent confrontation. Ultimately though, the story feels too slight (and perhaps a little too over- familiar) to entirely convince, and the shot of redemption we are offered at its conclusion isn’t entirely satisfactory. As I said before, there’s plenty to admire here, but perhaps, not an awful lot to enjoy. One thing’s for sure. This isn’t going to figure highly on a list of feature films recommended by the Yorkshire tourist board.