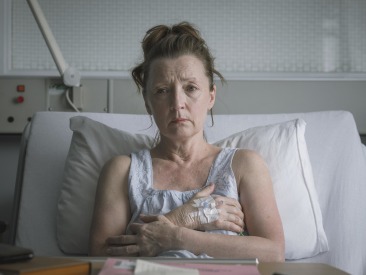 Written by Owen McCafferty and directed by Lisa Barros D’Sa and Glenn Leyburn, Ordinary Love is a poignant, heartfelt film, detailing the extraordinary ordinariness of dealing with a serious illness. Joan (Lesley Manville) and Tom (Liam Neeson) are the ‘normal people’ of the original title, a middle-aged couple who’ve been together all their adult lives. It’s a decade since their daughter died, and they’re coping, kind of, although they seem to have retreated into their dark, quiet, Northern Irish coastal home. They’re on auto-pilot really, muddling through and getting on.

But then Joan is diagnosed with breast cancer, and everything looks different – and yet somehow just the same. Life goes on: there’s still the supermarket shop to do, the gentle bickering about how much beer is too much beer, the nightly walks to feed the Fitbit. It’s just that, now, there are chemotherapy appointments too – and hair loss and existential fear. Their loneliness is cleverly revealed: ‘We’re both suffering,’ insists Tom, anguished, but Joan’s the one who can’t stop vomiting. ‘No, we’re not! This is happening to ME.’

Neeson is terrific in this role. He plays alpha-male ‘revenge dads’ so often that it’s easy to overlook his ability to inhabit subtler, more nuanced characters. His pain is palpable, his reserve convincing. Manville is less of a surprise – she’s superb, as you’d expect. I like the brittle, chin-up attitude she conveys, the doubt and terror just discernible. The supporting cast do a good job too, particularly David Wilmot as Peter, the primary school teacher with a terminal diagnosis, in whom Joan finds a confidante.

The movie is a timely reminder, too, of how much we need the NHS. A cancer diagnosis is stressful enough; grumbling half-heartedly about having to pay for hospital car parking ‘even when you’re a patient’ is the extent of the financial worries that add to Tom and Joan’s burden.

In the end though, it’s the mundanity that makes this film so heartbreaking. There’s no big cathartic moment, no dramatic revelation. But there is hope and there is love. Of the extraordinary, ordinary kind. 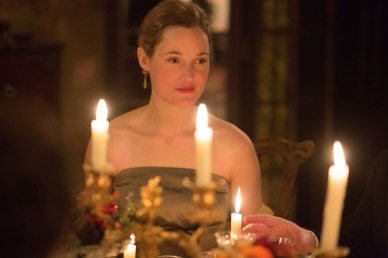 Phantom Thread comes to our screens burdened with promise. Written and directed by Paul Thomas Anderson (Magnolia, There will Be Blood), it abandons his usual Californian locations for 1950s UK, and stars Daniel Day Lewis in what is purported to be his final role. Little wonder it has received so many Oscar nominations.

Unsurprising then, that there is plenty here to admire, even if there is very little to actually like. As a character study, it’s cleverly done and the acting is sublime. Day Lewis’s personification of spoiled and finicky fashion designer Reynolds Woodcock is as detailed and compelling as we’ve come to expect; Lesley Manville’s portrayal of his sister Cyril an object lesson in understated acerbity. Newcomer Vicky Krieps is an enigmatic delight, breathing warmth and freshness into the role of Alma, the young waitress who catches Reynolds’ eye. It’s great to see Julia Davis revelling in the depiction of arch gossip Lady Baltimore, and there’s a host of supporting actors doing cracking stuff on screen. And it all looks wonderful, of course: from the gorgeous fashions to the sumptuous decor; from the washed-out lighting to the grandeur of their homes.

It’s the plot, I think, that bothers me. I don’t have the obvious concerns (rich, successful man with an overwhelming sense of entitlement meets poor foreign waitress with no understanding of her own potential – and proceeds to change her life) because I think these are successfully subverted by the way that Alma is portrayed; she has agency from the beginning, and makes her own desire as clear as his. She and Reynolds talk as equals; she is not quashed by him, even as she stands submissively allowing him to dress her. The set-up itself is fine: his unreasonable demands are shown for what they are; Cyril’s role as mediator between her brother and the world is clearly a necessary one. He’s a genius, and a successful one; allowances must be made, because he tends to tire of his girlfriends quickly, and treats them with evident contempt. But Alma is different. She challenges his behaviour, won’t allow him to dispose of her.

Some critics have suggested that this skews the power dynamic in her favour, or puts the couple on an even footing, but I find myself squirming at this suggestion. Because (minor spoiler alert!) Alma’s only power, in the end, is negative.  She doesn’t become stronger, she just weakens him. If mimicking the behaviour of Munchausens-by-proxy is the only means to sustain a relationship, then I’d argue the relationship is very toxic indeed. And it’s not that I’m suggesting that a film cannot portray a toxic relationship. Of course it can. Neither is it that I expect morals from my movies. It’s just… the story arc suggests this is a happy ending, of sorts, and the reviews I’ve read don’t even hint that this resolution is at least problematic for the characters involved. Misogyny is not challenged by feminine wiles and culinary arts, it’s merely reinforced. And, to my mind, this is a fatal wound from which Phantom Thread never quite recovers. 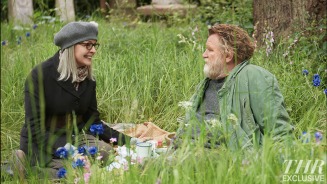 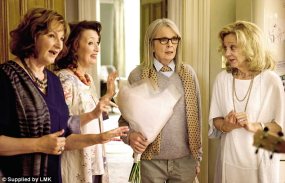 Well, we can’t say we haven’t been warned. Reviewers of Hampstead are mostly unimpressed by this based-on-real-life wannabe rom-com, which tells the tale of Donald Horner (Brendan Gleeson), a vagrant who builds a shack on Hampstead Heath, and his unlikely relationship with Emily Walker (Diane Keaton), an American widow in financial straits. Indeed, Wendy Ide, writing for The Guardian, goes so far as to call it “a ghastly faux-mance,” while Peter Bradshaw, in the same newspaper, notes ruefully that “Richard Curtis’s style of comedy drama is very difficult to imitate.” But it’s The Telegraph’s Robbie Collins who really skewers the movie with a one-star review and the acerbic observation that “Donald’s tumbledown cabin has its own well-stocked lake and an immaculate kitchen garden – when Emily pops around for a cosy diner à deux, there’s fresh salad served in a wooden bowl, grilled fish, and wine served in elegant stemware – while his vagrant’s beard is so well-conditioned it could win a prize at Crufts.” And, while my socialist leanings mean I never thought I’d side with anyone writing for this particular Tory rag, I find I just can’t argue with him.

Okay, I can argue a bit. I think the single star is a little unfair. The acting is, for the most part, really very good (Keaton and Gleeson are both extremely engaging, while Lesley Manville somehow manages to transcend her role, which is, it seems, ‘under-developed cypher, with a bit of secretly-tragic rich bitch thrown in’). The plot is nicely stitched together, holding our attention throughout. But… oh dear. This is very much an outsider’s view of poverty, a romanticised vision of the ‘authenticity’ that being poor provides. What it reminds me of most is the Noel Streatfeild novels I read as a child, which I both loved and derided, amused as I was by their privileged depiction of what it meant to be poor. “They’ve got no money,” I’d tell my mum, raising my seven-year-old eyebrows. “So they’re down to just a couple of servants, a nanny and a cook and some woman who comes in from the village now and again. And they’ve got to take in lodgers, because they’ve got this massive house. So there’re a couple of university professors and an opera singer all sharing the space. They can’t afford their places at ballet school, so they have to get scholarships.” And then we’d laugh, putting on ‘posh’ voices, and braying, “How on earth are we supposed to manage, dahling, with just a nanny and a cook?” Well, we found it funny anyway. Maybe you had to be there.

I understand the comparisons to Richard Curtis, but I think they miss something important. It’s not just that he’s better at it (funnier, more charming), but that he doesn’t pretend to be making a social point. His films are unabashedly about those who have it all: they’re frothy, unrealistic depictions of a London that doesn’t really exist, but they don’t claim to be anything else. Hampstead has pretentions toward social commentary, but it doesn’t understand its own material.

It’s not just the improbably delightful home that Donald has constructed from old windows and planks of wood, it’s Emily’s so-called money worries that make me pause for breath. “After I’ve sold the flat and paid off all the debts,” she sobs, “I’ll be left with a little bit, not much, but enough to get me something small outside London, maybe.” Enough, it turns out, to buy a sizeable beamed cottage next to a river on the outskirts of a picturesque Cotswolds village. Ah, that kind of ‘little bit.’ Poor Emily. And after all the hard work she’s never done and the jobs she’s never had. Surely she deserves more than this? (Actually, she does seem to have travelled back in time to the 1960s – well, it is outside London, so what do I expect? – maybe the property prices hark back to that time too?)

In the end, sadly, Hampstead is just a load of ill-informed nonsense, and there’s not much to be said in its defence. The true story it’s based on must have been much grimier and more interesting, and it’s a real shame we can’t get to the nub of it. The rose-tinted worldview we are presented with here is far too shallow to convey the important truths that are hinted at but never properly explored.