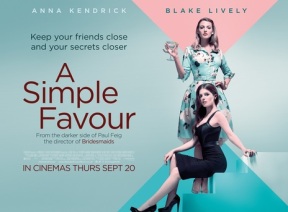 After the hysterical social media mauling that Paul Feig received over his all-woman remake of Ghostbusters, I fully expected him to navigate back towards the safer waters of his earlier material, but with A Simple Favour, he’s attempted something altogether trickier than the ‘women being outrageous’ comedies that made his reputation. It’s evident from the very start, as vintage French jazz oozes over the credits, that he’s trying to emulate one of those twisty-turny Gallic neo-noir thrillers of the 1950s – indeed, one of the characters even mentions Henri-Georges Clouzot’s Les Diaboliques, without so much as raising an ironic eyebrow.

A Simple Favour is the story of Stephanie (Anna Kendrick), an endlessly sparky single mother, trying to be positive after the death of her husband and half-brother (in the same car crash), and channeling most of her spare time into the Vlogs she does, which offer cookery tips to hard-pressed ‘moms.’ As a result, she is soundly patronised by the other parents at the school and doesn’t really have any close friends.

Her life changes dramatically, however,  when she encounters Emily (Blake Lively), a mysterious mover and shaker in the fashion industry, who lives in the kind of dream home that Stephanie has always fantasised about, and who has the dreamboat husband to go with it. Sean (Henry Golding) is a failed-novelist-turned-college-lecturer, a man who is clearly putty in his wife’s manipulative hands.

One day, Emily asks Stephanie for the titular favour. Could she pick up her son from school and look after him until Emily comes for him? Stephanie readily accepts, seeing a way for the two of them to develop their friendship, but as the days pass by and there is not so much as a text message from Emily, Stephanie begins to realise that something is wrong. She decides to do a little digging… and discovers that her new friend has several dark and troubling secrets.

Of course, this being Paul Feig, he keeps the tone comic throughout, something which works well enough for the first two thirds of the film, as Kendrick and Lively strike verbal sparks off each other – but, in the final third, when the storyline strikes out into darker territory, he might have been better advised to ease off on the chuckles. The problem with this lightness of tone is that nothing ever feel convincingly threatening. The various revelations, as they drop, lose much of their power and, instead of suspending my disbelief – as I need to – I start to notice how wildly implausible much of the storyline is. I also can’t help thinking of an alternative twist, that I’m convinced, would work better.

Look, this isn’t by any means a terrible film. Kendrick is as delightful as ever, Lively is convincingly seductive and, as for Golding, he clearly has a huge future ahead of him. But this doesn’t quite come off. Nice try, but no cigar.