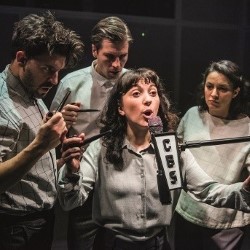 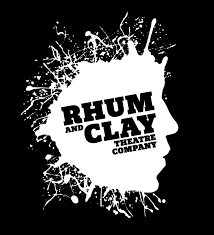 In 1938, Orson Welles’ Mercury Theatre Company transmitted a groundbreaking radio drama, an adaptation of H G Wells’ The War of the Worlds. In an attempt to bring the piece up to date, the story was told through a series of eerily realistic news reports, utilising sound effects and, at one point, even lapsing into total silence – an unprecedented technique on radio. The result was mass panic. Hordes of people, thinking they had tuned in to an actual news bulletin, left their homes in terror, convinced that the planet really was being invaded by aliens.

Theatre group Rhum and Clay reproduce extracts from the original broadcast, but intercut them with a contemporary story in which ambitious podcaster, Meena, visits the town of Grovers Mill in New Jersey, where Orson Welles located his adaptation. The Clinton/Trump election is fast approaching and Meena is chasing a story concerning a woman who claims to have been ‘abandoned’ as a result of Welles’ broadcast. Instead, she uncovers evidence of news articles being faked to further political aims – and to generate considerable income. Writer Isley Lynn is making an important point here. If hearts and minds can be so easily manipulated in the name of entertainment, then the same techniques can be (and are being) used for more nefarious purposes.

Simply but effectively staged, and convincingly acted by Jess Mabel Jones, Matthew Wells, Julian Spooner and Amalia Vitale, The War of the Worlds is one of those productions that prompts plenty of conversation afterwards. Those expecting a straight rerun of the Mercury Theatre’s transmission will be suprised and possibly even disappointed by this – it’s an altogether slipperier and more labyrinthine beast than its progenitor – but it makes its points eloquently and is well worth your time and money.

And you’ll be discussing it for hours.