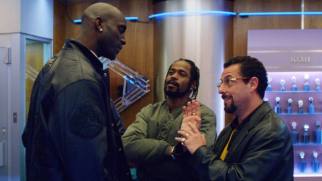 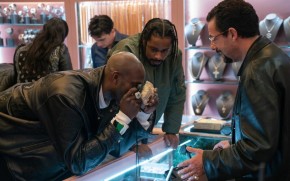 Hold the front-page! Adam Sandler has made a good movie. Actually, he’s made an excellent one. That’s not something I get to say very often.

To give the man his due, those with long memories will recall his assured turn in Paul Thomas Anderson’s Punch-Drunk Love (2002) and, more recently, he was pretty decent in The Meyerowitz Stories, but these lapses into quality are few and far between. Most of his output can be filed under E for ‘Embarrassing.’ So his starring role in the Safdie Brothers Uncut Gems is something of a revelation. Not only does he nail the central character perfectly, it’s hard to imagine any other actor being such a perfect fit.

Howard Ratner (no relation) is the proprietor of a jewellery store, situated in New York’s infamous ‘diamond district.’ Our introduction to him is unusual to say the least, as it’s via his small intestine – he’s having a colonoscopy. Howard is a wheeler-dealer, a man with a perpetual grin on his face and a gaze fixed resolutely on his next big score. He’s married to the long-suffering Dinah (Idina Menzel), he has several kids and he lives in a nice house in the suburbs. He also owns a swish city apartment where he entertains his mistress, Julia (Julia Fox), who is also an employee at his store. Against all the odds, Julia clearly loves Howard, and he is thinking seriously about leaving Dinah, who really doesn’t like him at all and has no hesitation in telling him so.

Howard senses that the biggest deal of his career is about to pop when he acquires a chunk of African rock containing a vein of rare ‘black’ opals, which he plans to put up for auction. But a visit to the store by famous basketball player Keven Garnett (gamely playing himself) complicates matters, as Garnett takes a shine to the stone and asks if he can ‘hold on to it’ for a day or so. Howard is understandably reluctant but finally agrees when Garnet leaves his championship ring as surety. But the problem is, Howard is an inveterate gambler, in hock to some very dangerous people – and when Garnett puts off returning the stone, a hideously complicated chain of events ensues.

The resulting action feels somewhat akin to a two-hour panic attack as Howard lurches from one desperate scenario to the next, being punched, excoriated and at one point literally stripped naked as he races frantically around, attempting to head off potential disaster. The Safdies achieve the seemingly impossible here by making me root for the frankly odious Howard; indeed, I’m soon so invested in him that I spend most of the movie perched on the edge of my seat, chewing my fingernails and praying that things will turn out well for him. And I’m hooked right up to the film’s heart-stopping conclusion.

Those who can’t cope with stress may not want to watch this. At times it feels like a genuinely life-shortening experience. But that, in my book, is a recommendation.

Uncut Gems will be streaming on Netflix from the end of the month, though I suspect its considerable powers will be somewhat diminished through the filter of a small screen. If you get the chance to see it in the cinema, take my advice – get it booked, grab a seat and buckle in for a thrill-ride.