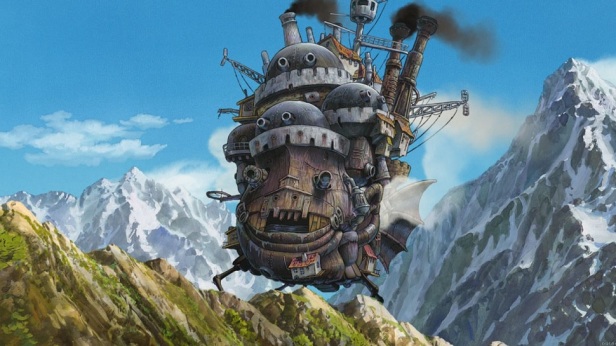 We had thought that the final film in the Cameo Cinema’s Studio Ghibli season had eluded us – but, luckily for us, they have scheduled a Thursday lunchtime screening of Howl’s Moving Castle and I’m delighted they have, because this is surely something that deserves to be viewed on the big screen. For its sheer visual impressiveness, it’s certainly the best-looking film of the season. Based on Diana Wynne Jones’ 1986 novel, Hayao Mizayaki’s sumptuous animation creates a stunning, steam-punk flavoured world, that contrasts charming Victorian imagery with futuristic depictions of flying machines and the horrors of warfare. Unlike the earlier films in the season, the version we see is dubbed and voiced by Western actors, but hey, you can’t have everything.

Eighteen year old Sophie (Emily Mortimer) is a shy, unassuming girl, who works in her late father’s hat shop. She’s always thought of herself as plain and listens enviously as the local women discuss the mysterious Howl (Christian Bale), a powerful (and devilishly handsome)  magician who dwells in the eponymous moving castle. It is said that if he falls for a beautiful woman, he will devour her heart – so Sophie assumes herself safe from his predations. But then she does have an encounter with him and, shortly afterwards, is cursed by one of his rivals, the Witch of the Waste (Lauren Bacall), who transforms her into an old woman. Desperate to find a cure for her condition, Sophie heads into the Wasteland, hoping she will find a wizard powerful enough to help her, but meets up instead, with a very helpful scarecrow. Pretty soon, she finds herself taking refuge in the moving castle itself, employed as a cleaner and constantly having to tend to wisecracking fire demon, Calcifer (Billy Crystal), who manages the travelling building and makes sure that everything runs smoothly for Howl.

As I said, the world-building here is absolutely spectacular, encompassing scenes that will make you gasp at the sheer beauty and ingenuity displayed on the screen. Rather less convincing is the needlessly complicated storyline, which is at times hard to follow. I am also less enthusiastic about the fact that Sophie’s age changes from scene-to-scene (the older Sophie is voiced by veteran actress, Jean Simmons); though this is, at first, an intriguing move, it eventually seems to lack a consistent logic – why is she young in this scene? And old in this one? And… middle-aged here?

However, the  sheer splendour and invention of the film overpower me in the end. It’s an extraordinary achievement and, up on the big screen, it glows like a collection of precious jewels.