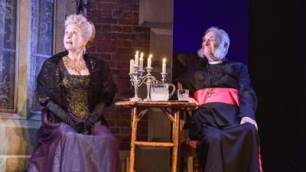 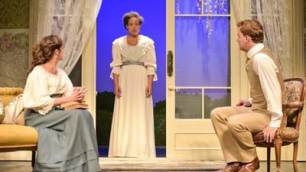 We all know what to expect from a play by Oscar Wilde, right? Lots of self-satisfied characters uttering verbal witticisms and arch remarks, as they view society from their well-uphostered perches. A Woman of No Importance, first performed in 1892, ticks all the boxes. Indeed, it’s so packed with memorable lines that I occasionally feel like I’m trapped in a book of theatrical quotes.

Lady Hunstanton (Liza Goddard) is hosting a soiree at her country house, and the great and the good are gathered for the occasion. The guests include American visitor, Miss Hester Worsely (Georgia Landers), and the odious Lord Illingworth (Mark Meadows), who prides himself on his rakish qualities. But when the mysterious Mrs Abuthnot (Katy Stephens) puts in a late appearance, it’s clear that she and Illingworth have previous history.  It turns out that they share a former connection that will have serious repercussions for Mrs Arbuthnot’s son, Gerald (Tim Gibson). He has just been offered the role of Lord Illingworth’s private secretary. Awkward.

This is a lavishly mounted production, but not everything works as well as it might. The decision to have elaborate scene changes covered by comic ditties by veteran performer Roy Hudd, in the role of Reverend Daubeny, seems to have been drafted in from an entirely different kind of production. It doesn’t help that I struggle to hear the lyrics of old favourites like Pretty Little Polly Perkins from Paddington Green – but, more importantly, these interludes seem to have nothing in common with the rest of the show. (I can almost imagine Oscar wincing in the wings as the songs unfold).

Despite this misstep, there are some strong performances here: Goddard is a delight as the endearingly forgetful Lady Hunstanton and Meadows entirely convincing as a thoroughly bad egg in dire need of a slapped face. Isla Blair is delightfully deadpan as the acid-tongued Lady Caroline Pontefract and Emma Amos excels as the rebellious Mrs Allenby.

The play itself is a bit of a mixed bag. Its heart is clearly in the right place and its defence of the inequalities of womanhood must have seemed positively groundbreaking when it was first performed – but there’s a prospensity too for over-sentimentality. Wilde’s evident belief that America was an innocent new world, where old indiscretions could be shrugged off and where promising new horizons beckoned, now feels ridiculously optimistic – but, of course, Oscar had his own reasons for hating his homeland’s interpretation of ‘morality’.

Fans of Mr Wilde – and there are many of them – should have a field day with this.