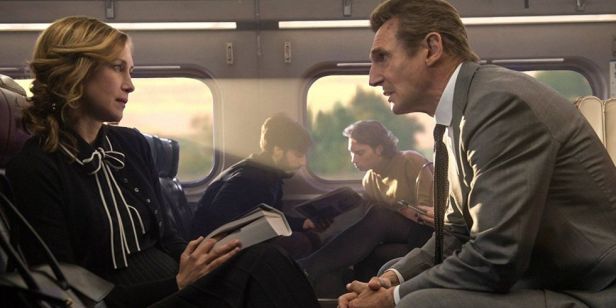 Since 2008’s Taken, Liam Neeson has expended much of his onscreen energy trying to sell himself as an ageing action hero. While the first film was something of a guilty pleasure, the two sequels weren’t anything like as sure-footed, but Neeson (who, I feel compelled to remind you, once starred in Schindler’s List) clearly isn’t a man to give up on an idea. In The Commuter he lends the daily trip to and from the office a whole new dimension. As the opening credits unfold, we see him taking his regular journey in all weathers and in all types of clothing. The sequence is so nicely put together, it lulls us into thinking that this will be a classier film than we’ve come to expect from Mr Neeson, of late – but, sadly, that feeling is rather short-lived.

Neeson plays Michael McCauley, former cop turned insurance salesman. Happily married to Karen (Elizabeth Montgomery), he gamely takes the train to work every day, just as he has for the last ten years. But things take a turn for the worse when he arrives at work one morning to discover that the bank has decided to let him go. What is he to do? He’s sixty years old, for goodness sake! He has two mortgages and his teenage son is planning to go to a fancy college! Over a few beers he confides in his old pal, Detective Alex Murphy (Patrick White), and then hurries off to the station to catch the train home.

Once on route, he encounters the mysterious Joanna (Vera Farmiga), who offers him a very strange way out of his current predicament. Somebody on the train doesn’t belong there, she tells him. All McCauley has to do is work out who it is, stick a miniature tracker on the guilty party and receive a massive cash payout in return, enough to solve all of his worries. At first, he’s intrigued enough to start looking for this unknown person but, as the labyrinthine plot unwinds, he begins to realise it’s going to be a lot more messy than he’d anticipated…

This, I’m afraid, is the point where the film starts to go (if you’ll forgive the pun) right off the rails. The premise is so ridiculous, so downright complicated, it’s hard to hold back hoots of disbelief. Okay, so the action sequences do generate some excitement, but a whole raft of worrying questions start to prey on the viewer’s mind. How have the villains managed to contrive such an intricate plot? How is it that not one tiny element of the plan ever lets them down? More worryingly, how does a man who has spent the last ten years selling insurance contrive to be so good at beating people up, leaping on and off trains and crawling into inaccessible places? Yes, he’s a former cop, but doesn’t that consist mostly of eating doughnuts?

As the train (and the plot) thunders relentlessly on, we are treated to needlessly extended punch-ups (a scene where Neeson belabours an unfortunate man with his own electric guitar invites whoops of derision rather than the thrills it is surely aiming for) and there’s a late ‘shock’ plot reveal that will frankly surprise precisely nobody. All this is a shame, because Neeson is an accomplished actor and he deserves better material than this. Did I mention that he was in Schindler’s List? Oh yes, I did.

Okay, fans of thick-ear movies will find things to relish here. And I’m aware of the ‘so bad it’s good’ contingent who make these films bankable. But I’m unable to suspend my disbelief enough to let this one go by. Keep an eye out for some interesting faces amidst McCauley’s fellow-passengers, though. Isn’t that Jonathan Banks (Mike Ehrmintraut of Breaking Bad)? And her with the pink hair and the sneer – surely that’s rising star Florence Pugh from Lady MacBeth?