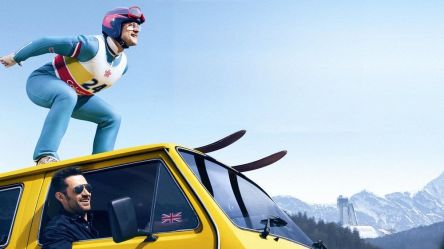 The British public loves an underdog and nowhere was this trait better exemplified than in the case of ‘Eddie the Eagle’ (real name Michael Edwards), who, at the 1988 Winter Olympics in Calgary, caught the attention of press and public alike by competing in the ski jump. He always knew he would finish last (though it should be said that at the time, he did set a new British record) but his hapless, charming manner somehow managed to make him an overnight star.

Dexter Fletcher’s watchable biopic fashions an entertaining (albeit, as has been suggested, somewhat inaccurate) account of the events leading up to his ‘triumph.’ It begins with Eddie’s childhood and his obsession with one day representing his country at the Olympics – in one sport or another – much to the chagrin of his plasterer father, Terry (Keith Allen), who urges him to get a sensible job. Soon enough, young Eddie has grown up to be Taron Egerton, gamely trying to disguise his good looks behind a series of gurning facial expressions. Eddie fails to make the Olympic skiing team, largely because of the sneering disapproval of team leader, Dustin Target (Tim McInnery), who clearly thinks that the sport should not be open to the working classes. But then Eddie discovers that the British don’t actually have a ski jumping team, and this seems to offer him a golden opportunity to compete without any, um, competition – so he hotfoots it to Gstaad. Here he comes to the attention of former champion ski jumper, Bronson Peary (Hugh Jackman), now a washed up alcoholic. Eddie begs Bronson to coach him and eventually he succumbs…

This is a charming if unchallenging film, that galumphs along at breakneck pace, rarely pausing to draw breath. Fletcher’s challenge here was to create suspense in a story that we all know the ending to and he largely succeeds, taking us to vertiginous heights and sending us straight down the slope. The story is essentially a bromance, the chemistry between Egerton and Jackman is a winner and there’s a last minute cameo by Christopher Walken, which is always a bonus.

The film doesn’t go beyond Calgary, which is probably just as well, as the reality is that Edwards is now working as a plasterer, the very trade that his father always urged him to pursue. Fame is fleeting of course, but this may be Eddie the Eagle’s second moment in the spotlight and it’s well worth the price of admission.