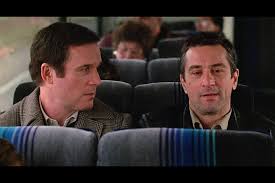 Since new cinema releases are hard to come by, we’ve decided to take a fresh look at some old favourites and reappraise them through a contemporary lens. Are they still as good as we thought they were? First out of the (DVD) box is Midnight Run (1988), directed by Martin Brest.

I first saw this film on its cinematic release (so in Manchester, I guess) and I went to it with no real expectations. Brest was, at that time, best known for his work on Beverly Hills Cop, a big-hitting feature for Eddie Murphy, and I pretty much thought it would be just another genre piece. But it’s much more than that, largely because of the wonderful chemistry between Robert De Niro and Charles Grodin, which turns this comedy crime caper into what used be known as a ‘buddy movie.’

De Niro plays Jack Walsh, former cop turned bounty hunter, working for bails bondsman, Eddie Moscone (Joe Pantoliano.) Moscone has recently put up the bail for accountant, Jonathan Mardukis (Grodin), who has stolen two million dollars from mafia big wig Jimmy Serrano (Denis Farina), money which he has promptly donated to charity. Serrano is eager to have his revenge and, meanwhile, the FBI, led by Agent Alonzo Mosely (Yapphet Kotto), are also very interested in talking to Mardukis. Can Walsh find his quarry and bring him in for trial before violent retribution catches up with him?

Of course, Midnight Run has all the genre tropes you’d expect from a film like this – hair raising shoot-outs, extended car chases and bruising punch ups  – but it’s in the developing relationship between Walsh and Mardukis that the film really shines. This, of course, features De Niro when he was still at the top of his game, able to convey so much with just a look and a shrug. Watch the heart-wrenching scene where Walsh is suddenly confronted by the teenage daughter he hasn’t seen in nine years and you are witnessing a masterclass in understatement. Grodin, meanwhile, plays his polar opposite, a calm and relaxed character, somehow nurturing despite his invidious position as the man who everybody wants to kill.

The witty screenplay by George Gallo fairly bristles with memorable one liners (I’m delighted to find that I can still remember most of them after all these years) and there’s also a hilarious turn from John Aston as dim-witted rival bounty hunter, Marvin Dorfler. The extended running ‘punch’ gag between him and Walsh is perfectly played throughout.

What seems particularly weird when viewing this from a contemporary perspective is all that gratuitous smoking – characters enjoy cigarettes on planes, trains, in offices, on the subway… just about everywhere you can think of. And of course, there are no mobile phones, so there are countless scenes of people talking from phone booths or running into bars just in time to pick up a receiver.

But these idiosyncrasies aside, Midnight Run stands time’s acid test. It’s still hugely enjoyable. Martin Brest had a few more successes waiting for him down the line, not least guiding Al Pacino to his Oscar win for Scent of a Woman in 1992, but this remains his most satisfying piece of work, the perfect choice for a locked-down life.

Whatever happened to Eddie Murphy? It’s a question I’ve often asked myself.

For those who weren’t moviegoers during the early 80s, it’s hard to convey the seismic impact he had on cinema. I still remember my first sight of him in Walter Hill’s 48 Hours, sitting alone in a prison cell, earphones in and singing raucously along to Roxanne. It was evident at a glance that he was going to be a massive movie star. And through that decade, that’s exactly what he became in films like Trading Places and Beverly Hills Cop.

But during the 90s, things went awry. A combination of poor film choices, and personal disasters contrived to push him further and further out of the public consciousness. With only occasional flashes of the old brilliance, it seemed to be over for him. So hearing that he is starring in a new movie, released without fanfare direct to Netflix comes as a bit of a surprise – as does the discovery that Dolemite Is My Name is actually pretty decent.

Murphy plays Rudy Ray Moore, a real life comedian/filmmaker, often referred to as the ‘Godfather of Rap’ and, moreover, a man who Murphy has often cited as an influence on his own early career. When we first encounter him, Moore is working by day as the manager of a Los Angeles record store; by night, he’s performing as a music club emcee, but failing to connect with audiences.

When Moore hears a homeless guy reciting  bawdy poetry about ‘Dolemite,’ a legendary character amongst older members of the local community, he spots an opportunity to reinvent himself as a standup comedian. Donning an afro wig, and some some flamboyant clothes he hits the stage. In his brash new potty-mouthed persona, he makes an instant connection with the customers, and his fame begins to spread.

When he subsequently offers his act to record labels, they shy away, horrified by the unashamedly sexual nature of the content. Undeterred, he decides to  record some albums himself with the aid of friends and relatives; and pretty soon, he finds himself on the billboard charts, selling records by the ton.

And then, one evening, a disappointing trip to the cinema gives him another idea. Why not write and produce a Dolemite movie? No film company wants to take it on, so once again, he has to find unconventional ways to make it happen…

It’s lovely to see some of Murphy’s old familiar spark being reignited here. Moore’s story is that of the classic underdog, the kind of guy who won’t take ‘no’ for an answer and whom audiences just can’t help rooting for. I’ve never caught up with the original Dolemite, but it’s clear from the scenes lovingly recreated here (and reprised in their original form in a post credits sequence) that this Blaxploitation classic belongs in the ‘so bad it’s good’ category. This sparky film, directed by Craig Brewer, tells the story with aplomb and the presence of Wesley Snipes as louche actor D’ouville Martin and (an uncredited) Bob Odenkirk as a predatory movie executive add to its appeal.

Anyone interested in seeing this can catch it any time they like on Netflix. As for Murphy, he has a Coming to America sequel in the works. It remains to be seen if that endeavour will be afforded the luxury of a theatrical release.