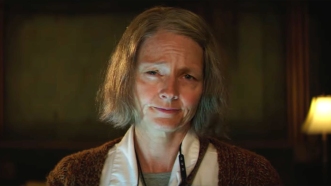 Set in a dystopian, near future Los Angeles… boy, if only I had a tenner for every time I’ve started a review with that line… there exists a secret location that’s kind of like BUPA for criminals. Basically, bad people become members, they pay their dues every month and, when they find themselves all shot up and in urgent need of medical attention, this is where they come to recuperate. The joint is run by The Nurse (Jodie Foster), once a valued member of the caring profession, now a hopeless alcoholic with a penchant for repairing the trickiest of wounds. You need a new liver? No problem! She has a 3D printer that can make you one! She’s ably assisted by Everest (Dave Bautista), a veritable man-mountain who’ll do anything for her but, she’s not a happy bunny,  haunted by something bad in her past, something we occasionally catch unsettling glimpses of.

Into this pressure cooker setting comes Waikiki (Sterling K. Brown) and his brother, Honolulu (Bryan Tyree Henry), who – after a bank job has gone belly-up – are badly wounded and struggling to survive. (In case you’re wondering about those names, characters are called after the holiday-themed rooms in which they are installed.)

But things are more complicated than usual. A problem with LA’s biggest water supplier has kicked off violent riots on the streets, so even getting across town is problematic. Once safely in the building, Waikiki meets up with his ‘friend,’ Nice (Sofia Boutella), an assassin who makes her living from bumping off VIPs, sharing the kill with her employers via a camera embedded in her head. Well, we’ve all got to earn a living, right?

And then, in comes The Wolf King (Jeff Goldblum), who, as the name might suggest, is LA’s most powerful gangster and also, it turns out, the man who set up the Hotel Artemis in the first place. So nobody is going to keep him out, right? Problem is, for a very important reason, he’s the last person that Waikiki and Honolulu want to meet up with…

Writer/director Drew Pearce’s futuristic film is an assured and intriguing piece of cinema. It may have all the trappings of a sci-fi movie, but it’s much more about the characters and the way they interact with each other. The complex storyline generates plenty of tension and there are  some fine performances from an ensemble cast. Foster is particularly good, submitting a brilliant character study in the lead role that makes me wish she’d act in more films. The setting too, with each room styled around a different theme, is memorable. Perhaps inevitably, in the final reel, events descend into violence, but this too is well-handled and doesn’t outstay its welcome. More sensitive viewers may wish to glance away from the screen at key moments.

So, that’s the Hotel Artemis. Well worth booking into for a short and occasionally enthralling city break. Just don’t expect to come out in one piece.