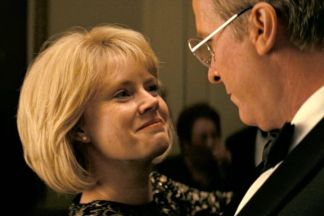 Those people who look at the current political landscape in America and despairingly ask themselves, ‘How could this ever have come to pass?’ should pop along to a showing of Vice at their earliest opportunity, where all will be explained. This is the story of how a taciturn bit-player in American politics cleverly advanced himself into a position of unprecedented authority, becoming the power behind the throne in the administration of George W Bush, and ushering in the kind of rampant corruption that would reach its apotheosis under the tiny thumb of one Mr Trump.

When we first meet Dick Cheney (Christian Bale), he’s a hopeless case: a University dropout with a drink problem, taking menial work to make ends meet. After a confrontation with his long-suffering wife, Lynne (Amy Adams), he vows to straighten himself out and enrols in a political internship, where he finds himself assigned to Republican congressman, Donald Rumsfeld (Steve Carell in his by-now-habitual good form). Largely by nodding his head a lot and saying very little, Cheney’s career progresses in leaps and bounds – and, when he finally has the chance to play Vice President to the very naive George W Bush (Sam Rockwell), he spots an opportunity to seize the kind of power normally reserved for the President himself.

Adam McKay’s film certainly has the potential to be yet another dull political biopic in the mould of The Front Runner, but it’s lifted way above this level by the playful nature of the storytelling. Whenever there’s any danger of events beginning to drag, McKay has a way of enervating proceedings – a Shakespearian parody here, a sly aside to the camera there – and the repeated analogy of Cheney’s skills as a fisherman are brilliantly exploited as we watch him quietly reeling the next sucker into his control. (When the sucker in question is the President of the USA, it’s particularly chilling.)

There’s also an inspired device where everyman narrator Kurt (Jessie Plemons) keeps popping up to offer his insights into what’s happening, informing us that he and Cheney are somehow ‘related,’ a mystery that’s finally explained in a moment so shocking it nearly has me leaping out of my cinema seat.

Of course, I can’t review this film without mentioning Bale’s Oscar-nominated performance in the lead role. We may be a little jaded by his insistence on physically occupying his chosen subjects, but theres no doubting the fact that he has once again achieved a stunning transformation, as shocking in its own way as what he did to his body in The Machinist. But it’s more than just the look. Bale conveys the character’s traits in every shrug, every grimace, every sly glance – and remember, he’s impersonating a character who’s so impassive there’s very little to work with. It’s a superb central performance in a very assured film.

Make sure you don’t leave the cinema too early – there’s an amusing post-credits sequence that brings matters bang up to date. I emerge feeling as though my eyes have been well and truly opened – and uncomfortably aware that the double meaning of the film’s title is all too apparent.