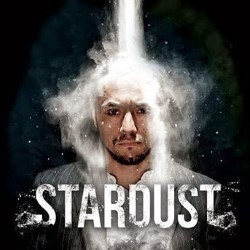 Stardust is all about cocaine – its history, its usage, its properties. It’s about the way a tribal drug, used for thousands of years in religious ceremonies has been taken up by the Western world, exploited and commodified; how people are enslaved by it, murdered because of it and how casual users across the Western world, no matter how they might protest, now have blood on their hands. Make no mistake, this is a hard-hitting piece.

Our MC for this show is Miguel Hernando Torres Umba, a charismatic artist/performer making his debut at the Fringe. He uses many different techniques to get his story across. There are dreamy back projections, and ethereal music. For one section he adopts the persona of a game show host and gets the entire audience to interact with him. In another, he spoofs the famous scene from Scarface where Pacino takes all those bullets. Oh, and did I mention that he’s also an incredible dancer? One section where he depicts, through dance, the way that cocaine acts on the senses is a real highlight for me. He dances like he’s just inadvertently stepped on a 60,000 volt cable… leaping and scrambling around the stage until the inevitable comedown hits him and everything goes eerily into slow motion.

There are plenty of laughs scattered throughout this exciting multi-media show, but it clearly has a very serious message. Umba now lives in London, but was born in Colombia and is understandably sick of the way his nation is habitually depicted, how everybody in the West assumes that his countrymen are all drug dealers. He demonstrates very effectively how the people that grow coca are themselves victims of the organised crime that has grown up around the harvesting of the plant. There are the harrowing testimonies of people too scared not to grow it, people who have seen their relatives tortured and murdered in order to make them obey.

This is a powerful polemic delivered as a slice of entertainment, sharp enough and affecting enough to change hearts and minds. Go and see this and, whatever your views on cocaine, prepare to be enlightened.