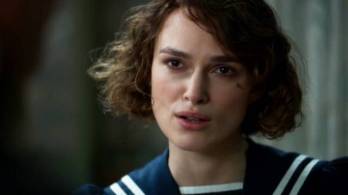 Imagine this scenario, if you will. A celebrity decides he wants to write a novel. He can’t actually write fiction himself so he gets somebody else to write it for him, but insists that his name goes on the published book. When the book is a huge success, he gets the writer to turn out more stories on the same theme and resolutely refuses to give their creator any credit whatsoever. Shocking, right? And yes, I know, it’s a depressingly familiar occurrence in this day and age. But Colette is proof that it’s by no means a new phenomenon.

When we first meet Sidonie-Gabrielle Colette (Keira Knightly), she’s a young woman living in the Burgundy countryside, carrying on a secret romance with trusted family friend Willy (Dominic West). He lives in Paris, where he is carving out a precarious career as an ‘author,’ many of his books ghost-written for him by more talented acquaintances. Pretty soon, he and Gabrielle are married, and she moves in to his apartment in the city, where she realises that her new husband is not exactly trustworthy. When she discovers he has been unfaithful to her, he protests that it’s not really his fault: he’s a man and he needs stimulation!

On hearing Gabrielle’s stories about her childhood, Willy decides that there just might be a book in it. He encourages her to write, mostly by locking her in her room for hours on end. The resulting book, Claudine à L’école, becomes an instant hit, selling millions of copies and necessitating sequels. Colette, as she now calls herself, is only just beginning to realize her own powers. She agrees to continue the deception but warns Willy that she is attracted to other people too…

Colette feels weirdly prescient, yet another example of a talented woman being subjugated to the will of a manipulative man – and then fighting back. Knightly, who often faces accusations that she ‘cannot act’ is on splendid form here, giving a nuanced and thoroughly believable performance in the lead role, while West somehow manages the impossible, making the repellant Willy oddly charming, so that I understand how this man can bend so many people to his will.

Of course, vital to this biopic is the subject of intellectual property, and anyone who has published any sort of written work will doubtless share my horror at the scene where Willy callously instructs an employee to burn the original handwritten copies of the Claudine novels. It’s all I can do not to shout at the screen.

But at the heart of this tale is Colette herself, and – even if this were a contemporary tale – it would still feel pretty sensational, what with her (partially) open marriage, lesbian affairs and long-term relationship with the (probably) transgender ‘Missy’ de Morny (Denise Gough). The fact that it all happened back in the 1890s is the real eye-opener. Gough and Knightly imbue the latter partnership with real warmth, and it’s fascinating to see the contemporary reactions to their public intimacy.

I’m currently working my way through Colette’s short stories, which are rather fey and whimsical, it must be said. But I’m planning to read the novels soon, and hoping to find some of what made her so beloved, and eventually won her the Nobel Prize for Literature.

Meanwhile, do catch this sumptuous, witty evocation of Parisian life at the turn of the century. It’s really very good.