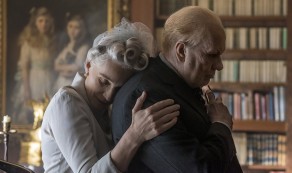 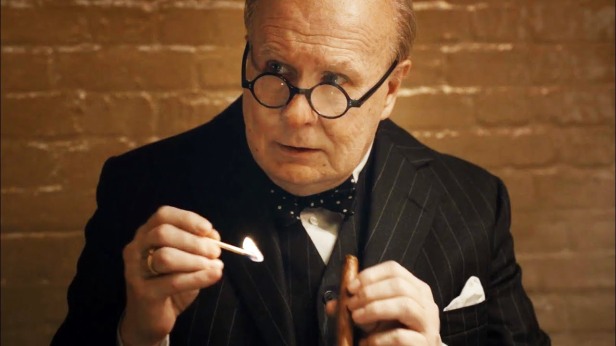 Biopics can be a bit like buses. No sooner has Brian Cox’s Churchill drifted over the horizon than it’s Gary Oldman’s turn to don the homburg hat and wave a zeppelin-sized cigar in Joe Wright’s Darkest Hour. While Cox made a perfectly good fist of his portrayal of the infamous war leader, Oldman submits a simply astonishing performance, a stellar tub-thumping object lesson in how to act everyone else off the screen. Despite several nominations down the years, he’s never won an Academy Award, but this should surely be the role to rectify that situation.

It’s May 1940 and the British forces in France are being disastrously defeated by the might of Hitler’s Germany. The unpopular (and ailing) Neville Chamberlain (Ronald Pickup) opts to step down from the post of Prime Minister and a coalition government looks around for somebody to take his place. It’s a poisoned chalice and nobody on either side makes any secret of the fact that Winston Churchill is not their preferred choice, particularly after his key involvement in the military disaster that was Gallipoli. Nevertheless, he is chosen, and is faced with the almost impossible task of rallying the country to fight on, when most of his colleagues are intent on making a deal with Mr Hitler. Elizabeth Layton (Lily James, looking uncannily like a younger Gemma Arterton) is assigned to be Churchill’s secretary and so has an inside view on how he operates, often dictating his famous speeches from the toilet (why not, his initials are on the door?) and explosively losing his temper whenever she gets something wrong. Meanwhile, the British expeditionary force is surrounded and fleeing towards Dunkirk and it’s starting to look as though they are about to be completely annihilated…

Wright has already dealt with Dunkirk in Atonement, so that side of things is kept very much in the background – or, more often, glimpsed from aeroplanes as bombs drop on the British forces. Here, the director concentrates on a character study of a complex man, chronicling his struggles with depression, his occasional lapses into bluster and his almost overpowering sense of isolation. Again and again Wright shows him enclosed in small spaces – riding in a tiny elevator, framed by the outline of a window, making important phone calls from the smallest room in the house. As well as that stellar performance, Oldman is aided by an incredible transformation, achieved entirely by ace Japanese prosthetics artist Kazuhiro Tsuji. Even in extreme close up, his efforts are utterly convincing.

If there’s a price to pay for such grandstanding, it’s inevitably the fact that the rest of the cast – Ben Mendlesohn’s turn as King George VI aside – are relegated pretty much to the sidelines. Even the usually dependable Kristin Scott Thomas as Clementine is reduced to wandering on to give her hubby the occasional pep talk; it would have been nice to see her given a little more to do.

But, niggles aside, Darkest Hour is pretty enjoyable, and probably worth the price of admission just to see Oldman give that speech. 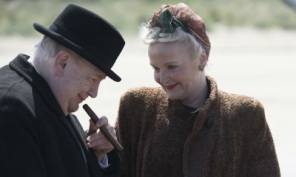 Biopics are notoriously hard to bring off successfully. Jonathan Teblitzsky, better known perhaps for his work on Broadchurch, should therefore be heartily congratulated for what he has achieved here, creating a film that not only shows us aspects of an iconic man that we’ve never really witnessed before, but also one that includes several scenes that are genuinely affecting. (Trust me, take some hankies.)

Set in the three days leading up to Operation Overlord, we are shown a Churchill who is being completely marginalised by Eisenhower (John Slattery) and by Montgomery (Julian Wadham), both of whom feel he is hopelessly out of touch and well past his sell-by date. Moreover, we are shown a Churchill who is bitterly opposed to the invasion of France, fearing a repetition of the disastrous events of Gallipoli, which he sanctioned during the First World War.

Brian Cox’s performance in the lead role is extraordinary; more than just an uncanny impersonation, it goes to the heart of the man behind the public image, showing not just the irascible old tyrant we’ve all seen before, but also a man haunted by the ghosts of the thousands of young troops he sent to their deaths. As the long-suffering Clementine, Miranda Richardson provides just the right degree of steely determination, as she manages her difficult husband from the wings, smoothing over his many outbursts, and helping those who have to deal with him get their messages home. One of those maligned is his young secretary, Helen (a touching performance by Ella Purnell), who suffers from his harsh words more than most – and who has more reason than most to be fearful of the outcome of Operation Overlord.

I fully expect to see Cox’s efforts awarded prizes next time these things are handed out – but the film is more than just that remarkable performance.