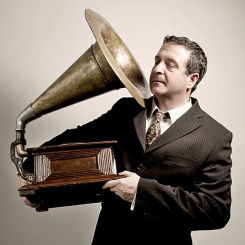 Mark Thomas is always a delight to watch: standup, storyteller, activist – all of these terms can be applied to him and all seem to fit perfectly. We missed Bravo Figaro at last year’s festival, so this seems like a welcome addition to our lockdown entertainment options, streaming live on YouTube for just £5, with a percentage of ticket purchases going to the Traverse theatre.

Business is pretty much as usual here, as Thomas ambles onto a sparsely furnished stage and begins to unfold the story of his father, Colin, a hardworking family man, a builder by trade who, unusually for a working class chap, developed a fervent passion for opera. Thomas pulls no punches in his depiction of a man who was never slow in using his own fists when angered and who clearly ruled his wife and chidren with a rod of iron. But, when he was stricken by a rare form of degenerative illness, Colin became a shadow of the man he used to be – and his son had to look for ways in which he might remind his father of the things that used to motivate him.

This clever and moving story, draws a compelling narrative, interspersed with occasional recorded pieces featuring the voices of his parents in conversation.

It’s testament to Thomas’s considerable skill as a raconteur that he manages to flit effortlessly in and out of the various scenes, between genuinely funny observations and heartwrenching moments of realisation. Not everything here quite hits home as surely as it might, for example, a brief passage where he explains to the younger people in the audience what vinyl is seems like a misstep – they are the hipster generation, after all.

But that’s a minor quibble. This is a charming and perceptive piece, that provides an excellent way to fill an hour of lockdown. I look forward to seeing him again, preferrably in a packed theatre, with the laughter of others ringing around me.