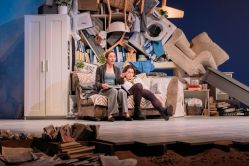 Jumpy is a cracker of a show, at once funny and appalling, familiar and uncomfortable. It’s an episodic tale, a series of vignettes that combine to give a frank and detailed examination of a middle-class family life.

Primarily, this is the tale of Hilary and Tilly, a  mother and daughter struggling with their relationship. Hilary (Pauline Knowles) has just turned fifty, her marriage is stale and she’s about to lose her job. She’s in the habit of pouring a glass of wine as soon as she sets foot inside her home, and she’s frustrated by the way her daughter dismisses her. Tilly (Molly Vevers) is a truculent young woman, happy when she’s with her friends and angry with Hilary. Her anger isn’t specific – Hilary has done nothing wrong – it’s more of a howl against the world, where a fifteen-year-old can’t quite be free. She’s tugging at the apron strings, but of course still needs her mum.

Make no mistake, at its core this is a comedy, and the teenage angst is played for laughs. The way Vevers tuts and scowls and contorts her body stays just the right side of parody: this is adolescence writ large – played for humour but with enough realism to keep us all on side. And while Knowles’ portrayal of Hilary is touchingly vulnerable – she really seems to ache with the difficulty of it all – it’s still funny, in a wry, sardonic way.

There’s a great supporting cast too, most notably Gail Watson as Frances, whose burlesque routine is as impressive as it is hilarious, and Richard Conlon as Roland, the spineless cad who can’t see beyond his own shallow needs. And Stephen McCole’s Mark makes an interesting counterpoint, straight man to the comedians, the solid centre at the heart of Hilary’s life.

It’s brutal in places; it’ll make you question and evaluate the relationships you have with other people, the world, with politics (and wine). But that’s all to the good. April De Angelis’s play is definitely one to see. So get yourself a ticket, and catch it while you can.